You can absolutely bulk on a vegan diet. Many of the longest-living cultures in the world eat a mostly or fully plant-based diet. Furthermore, vegans tend to be in better health than the general population. So compared to the average man, in many ways vegans are starting off at an advantage.

In this post, let’s quickly talk about some common criticisms that vegans face when they try to bulk up.

One common criticism of vegan bulking diets is that it’s hard to eat enough protein. However, most people vastly overestimate the amount of protein that’s required to build muscle. Vegans only need around 0.9 grams of protein per pound bodyweight per day. For a 150-pound man, that’s around 135 grams of protein per day. That might sound like a lot, but many plant-based foods have some protein in them, and given that bulking requires eating so much food overall, protein tends to accumulate pretty quickly. Plus, you can always get a plant-based protein powder.

Another common criticism is that the protein quality of plant-based foods is poor. The idea here is that since plant-based protein sources aren’t “complete” protein sources (i.e. they don’t contain all the essential amino acids) that they won’t be as good for building muscle. However, a good vegan diet will include a variety of different foods, each of which will be bringing different amino acids to the table. So long as your diet includes a mix of grains, legumes, seeds, nuts, peas, and soy, you won’t have any problems with protein quality at all. Plus, pea protein powder is extremely rich in the amino acid leucine, which is great for stimulating muscle growth. (It has even more leucine than whey protein.)

Sometimes you’ll also hear the argument that soy protein is going to raise estrogen and lower testosterone. In large quantities, it might, and we go over that research in our vegan bulking article, but for the most part, no, soy won’t negatively impact your hormones, especially if you consume a balanced diet. (Although you may want to stick to about one serving of soy per day, just to play it totally safe.)

Getting Enough Vitamin B-12, Zinc, and Iron

Finally, there’s the criticism that vegan diets are lacking in certain vitamins and minerals. It’s true that vegan diets tend to be low in low in certain nutrients, such as vitamin B-12. It’s also harder to get enough iron and zinc, among a few others. If you aren’t getting enough of these nutrients, it won’t directly impact your ability to build muscle, but it’s going to negatively affect your health, which can indirectly affect your ability to bulk up. However, most vegans have a pretty simple solution for this: take a multivitamin designed for vegans.

The same can be said about DHA, which can be gotten from algae oil. And creatine, which most people supplement with while bulking up anyway. And protein powder, which is available in plant-based variants (such as pea + rice protein blends.)

Vegan Ectomorphs Can Bulk with the Best of Them

Overall, so long as you’re taking care to eat a balanced and healthy plant-based diet with adequate protein in it, vegans are able to bulk up just as quickly as anyone else. The basic bulking principles are the same for everyone, but that doesn’t mean that everyone needs to eat the exact same diet. In fact, when comparing different diets, plant-based diets lend themselves quite well to bulking up, given that they’re high in nutritious carbohydrates. (Higher-carb diets tend to be ideal for building muscle.)

As far as our bulking program goes, we practice something called “flexible dieting”, which allows people to eat in a way that best suits them while still getting optimal results. We teach you the principles of a good bulking diet, we give you some sample meal plans, we teach you some good bulking recipes, and then it’s totally up to you what foods you eat. (And yes, our program includes plant-based recipes.)

So, anyway, eating a vegan diet is great for bulking. 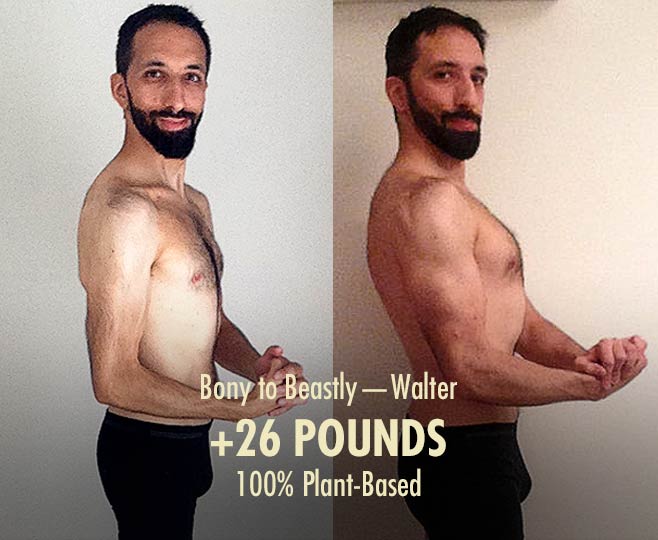 Category: 2. Nutrition & Supplement Questions, 6. Can I do the Program?