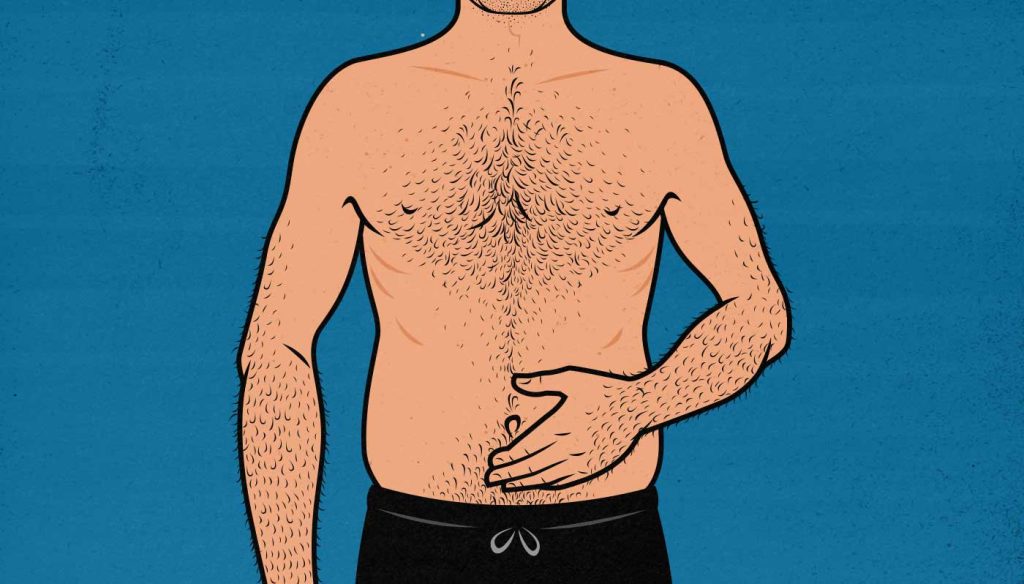 When I first started weight training and eating for muscle growth, I expected to have more energy, to become stronger, and to look better. But the first thing I noticed was that my stomach started to bloat up like a blowfish. It wasn’t fat, either. I still had abs. But instead of having a flat, washboard stomach, it was curved outwards like a turtle shell.

As I continued to pound down the calories, I started feeling perpetually full, bloated, and gassy. I’d often get indigestion, I struggled with acid reflux, and sometimes I’d even get diarrhea. Something wasn’t going right, but I didn’t know what it was.

I considered going back to my old diet, but that would mean going back to being skinny, and there was no way I was doing that. Fortunately, I realized that this was a fairly common issue with bodybuilders, and that there were a few good ways to improve digestion. Now, even after gaining 65 pounds, it’s easy for me to get into a comfortable calorie surplus.

So, what’s the best way to fix bloating, gas, indigestion, and acid reflux while building muscle?

Why Is It Hard to Digest Food?

We specialize in helping skinny guys build muscle, which means gaining weight, which means eating more calories—more food. And that extra food can cause problems: bloating, indigestion, gas, and sometimes even diarrhea.

One of the reasons why most skinny guys have trouble with traditional bodybuilding diets is because our stomachs are often smaller than average. If you’re a so-called “ectomorph,” with a thinner frame and a shallower ribcage, that means there’s less room for your stomach. If we compare that against the average man, not only does he have more room in his torso for his stomach, but he also has a history of overeating, which can stretch his stomach, making it bigger.

To make matters even more complicated, skinny guys are often “hardgainers,” in the sense that our metabolisms are more adaptive than normal. What happens is that we fidget more, move more, and burn off more energy as heat (study). It’s totally subconscious. We don’t even realize that we’re doing it. But it can burn off as much as 950 extra calories per day:

So we have a situation where some skinny guys have more meagre appetites, smaller stomachs, and faster metabolisms. But because we’re trying to gain weight, we need to find a way to eat more food. So we shovel mountains of food down, and we wind up feeling bloated and cramped, and we struggle with acid reflux and indigestion.

To be clear, running into digestion problems is common with all bodybuilders. Eating a lot of food is hard. But it can be especially hard for skinny guys who are just getting started. We often find ourselves looking pregnant after eating a big bulking meal.

So, how do you get rid of the bloating and indigestion?

The Problem With Bodybuilding Meal Plans

It’s common for skinny beginners to want to change everything all at once. We’re tired of being skinny, we know we’re doing something wrong, and so we want to completely overhaul our exercise routine, diet, and lifestyle. And I get that. I was the same way. During my first bulking attempt, I cut out all of the junk food I was eating, and I replaced it with a stock bulking diet that I found in a bodybuilding magazine.

Overnight, I changed every single meal I ate. I swapped out all of the foods I was eating with somebody else’s diet. And my stomach didn’t like it. I got bloated, I struggled to digest the food, and I started having acid reflux. And I couldn’t figure out why. I was eating the perfect bodybuilding diet, wasn’t I? What was I doing wrong?

Here are some common examples:

Most of these digestion issues are caused by changing our diets too much too soon. We’re eating enormous meals before our stomachs have expanded enough to be able to hold them. We’re drinking too much milk before we’re producing the digestive enzymes we need to digest it. We’re changing where where we get our energy before our body has adapted to it. And we’re eating too much fibre all of us a sudden, before the bacteria in our stomach can learn to manage it.

The absolute worst way to approach a bulking diet, then, is to start copying some bodybuilder’s meal plan. You’ll be abandoning all of the foods that you’re good at digesting, replacing them with foods you don’t know how to digest. You’ll be abandoning the schedule that your body has acclimatized to, replacing it with a schedule that you aren’t prepared for. This can affect us in a variety of ways, ranging from bloating to gas to indigestion, and it can even make us wake up in the middle of the night needing to pee.

The best way to build a bulking diet, then, is to gradually change your current diet.

How to Digest Food More Easily While Bulking

When we start eating for muscle growth, we want to build on our current diet, making strategic changes gradually. Here are some good ways to approach it:

Oh, and there’s nothing wrong with having 2–3 scoops of whey protein every day if you’re having trouble hitting your daily protein goals. But if you start getting diarrhea, that might be why! That’s often the first sign that you’re overdoing it on the whey protein. So if that happens, diversify your protein sources. Try getting your protein from meat, fish, milk, eggs, legumes, or even from other protein powders.

It’s common for skinny guys to run into trouble when they first start eating a bulking diet. This is something that most bodybuilders struggle with. It’s hard to digest a lot of calories. But even so, there are some things we can do to make it much easier.

There are a lot of tricks, and we’ve covered them above, but most of it boils down to changing your diet gradually, avoiding abnormally large meals, getting more of your calories from snacks, and being mindful of overdoing your fibre intake.

When I first started building muscle, my bulking diet was giving me a lot of grief. But over time, my stomach got bigger, my digestion system got stronger, and I started being able to digest a wider variety of foods more easily. We just have to be patient with it.