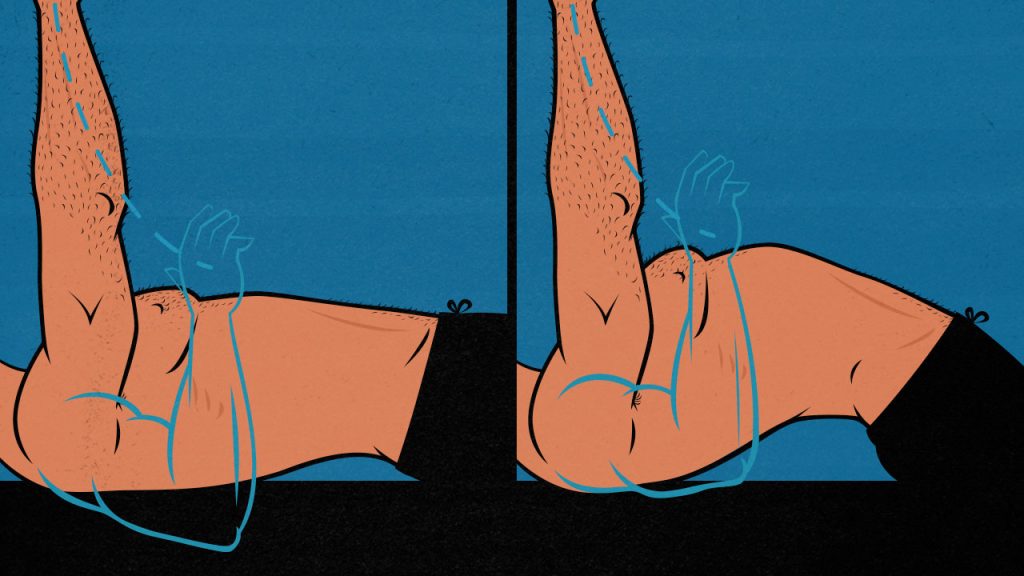 Most people arch when they do the bench press, especially if they come from a strength training or powerlifting background. It shortens the range of motion and gives our shoulders better leverage, allowing us to push more weight. But what if you aren’t a powerlifter? What if you aren’t just trying to move more weight, you’re also trying to build more muscle? Should you be arching? Or does it turn the bench press into more of a decline press, biasing your lower chest, leaving your upper chest high and dry?

A new study by Cudlip and colleagues compared muscle activation when benching with a neutral spine versus benching with an arched back. It looked into back and triceps activation, as well as upper and lower chest activation.

So, what did they find? How does arching your back affect muscle growth when benching?

If you’d rather watch than read, I’ve got a video about arching on the bench press that contains all of the same content. The article and video are both the same length and cover all of the same details. Totally up to you.

I noticed that I’ve really been liking YouTube fitness lately, so I’ve started filming videos for our own channel. I’m new still, but the goal is to put out a new video every week or two.

If you’d rather read, read on!

The Limits of Muscle Activation Research

Before we dive into the study results, keep in mind that muscle activation research—EMG research—isn’t the same as hypertrophy research. Just because a muscle shows higher activation doesn’t necessarily mean it will grow faster. For example, muscle activation tends to be highest when our muscles are challenged in a contracted position, whereas we tend to stimulate more growth when our muscles are challenged in a lengthened position.

Imagine someone doing a chest fly on the pec deck machine. EMG research will tend to show lower muscle activation when the muscles are being challenged under a deep stretch… but that’s actually where most of the muscle growth is being stimulated. Then, when you’re contracting your chest at the top of the movement, muscle activation is off the charts, but you’re not stimulating nearly as much muscle growth.

The reason that challenging your muscles in a deep stretch is so good for building muscle is that it combines both passive and active tension, giving a greater overall growth stimulus (meta-analysis).

You can imagine how this can cause problems. Think of the dumbbell fly and the cable fly. The dumbbell fly works our muscles under a deep stretch, which is perfect for building muscle, but it would score low in an EMG study. The cable fly tends to be more challenging when our pecs are contracted, which isn’t all that great for building muscle, but it might score great according to EMG research.

What’s nice about this bench press arch study is it’s comparing two nearly identical exercise variations with very similar resistance curves. Whether you arch or not, you’re challenging your chest under a deep stretch, which is perfect for building muscle.

Lat Activation on the Bench Press

When you arch, you need to clench your lats to hold yourself in position, significantly increasing lat activation. This tension in the lats is noticeable enough that powerlifters used to bulk up their lats to improve their stability on the bench press. This idea gradually fell out of favour as powerlifters realized that their lats weren’t actually helping them move the weight.

Your lats probably won’t limit your performance on the bench press, and I doubt they’d be brought close enough to muscle failure to see much muscle growth, especially if you’ve been bulking up your back with actual back exercises. We can ignore this part.

Triceps Activation on the Bench Press

Greg Nuckols reviewed this study in Monthly Applications in Strength Sport (MASS), and his guess is that people tend to tuck their elbows more when they arch, and it’s the tucked elbows that increase triceps activation. That sounds plausible to me.

What’s cool is this increase in triceps activation is pretty sizeable. And since your triceps can indeed be a limiting factor on the bench press, you can work them hard enough to stimulate quite a bit of extra arm growth. What’s even cooler is that involving your triceps doesn’t take away from chest activation—at all. It’s bonus growth.

Is the Bench Press Good for the Upper Chest?

There’s a popular idea is that the flat bench press, whether you arch or not, is a poor exercise for working your upper chest. You’ll hear a lot of bodybuilders claiming that focusing on the barbell bench press will give your chest a bottom-heavy look. That doesn’t seem to be the case. Both the mid/lower chest (sternal fibres) and upper chest (clavicular fibres) of the chest were worked quite hard. It looks like the bench press is great for overall chest growth.

We might be able to do even better, though. One of the main functions of the upper chest (and front delts) is shoulder flexion, so to get even more growth in your upper chest, you might want to use a slightly narrower grip and tuck your elbows to somewhere in the neighbourhood of 45 degrees. As we covered above, that will bring your triceps into the lift, and it should also work your upper chest and delts harder. The bench press will become even more of a compound lift.

There’s another popular idea that arching your back turns the bench press into more of a decline bench press, emphasizing the bottom portion of the chest. But that’s not the case. Benching with an arch seems to work the upper chest just as much as benching with a flatter back.

The only difference when you arch seems to be greater activation in your mid/lower chest. But that measurement didn’t reach statistical significance. I think a safer takeaway is that arching doesn’t seem to alter which areas of the chest get worked—at least not by much, and certainly not in a negative way.

With that said, whether you arch or not, I still think it’s wise to include some incline bench pressing, landmine pressing, or push-ups with your feet raised. More exercise variety tends to be better for building a strong, balanced physique. So to bulk up your chest, you should choose a few different chest exercises that suit you well. That’s the approach we take in our hypertrophy programs. We aren’t just trying to get stronger at specific lifts, we’re trying to get bigger and stronger overall.

Does Arching Reduce Range of Motion?

But with thinner builds like ours, where we tend to have longer arms and shallower ribcages, even if we use a moderate arch, we can still get a full stretch on our chests. It’s just that instead of bringing the bar down lower to meet our chests, we’re bringing our chests up higher to meet the bar. It’s the exact same degree of stretch. There’s a little bit less range of motion, but it’s cutting out a tiny portion of the lift where our chests are in a more contracted position. It probably doesn’t matter very much.

The Main Benefit of Arching

The last point is that, as far as I can tell, this study had the participants using the same load whether they were using an arch or not. But most people can bench more weight when they use an arch. And when you lift more weight, you tend to get even higher muscle activation. As a result, I’d expect using an arch to give an even greater advantage than this study shows.

Benching with an arch seems to slightly improve muscle activation, especially if we factor in that you’ll probably be able to bench more weight, further increasing muscle activation. There doesn’t seem to be any downside, either. Arching doesn’t reduce activation in the upper chest. And unless your arch is extreme, it needn’t cut out the deep chest stretch at the bottom of the lift.

But sometimes arching can be uncomfortable or cause a back injury to flare up. If that’s the case, no worries—you can bench with a flat back. These differences aren’t all that big. You can still build a powerful chest.