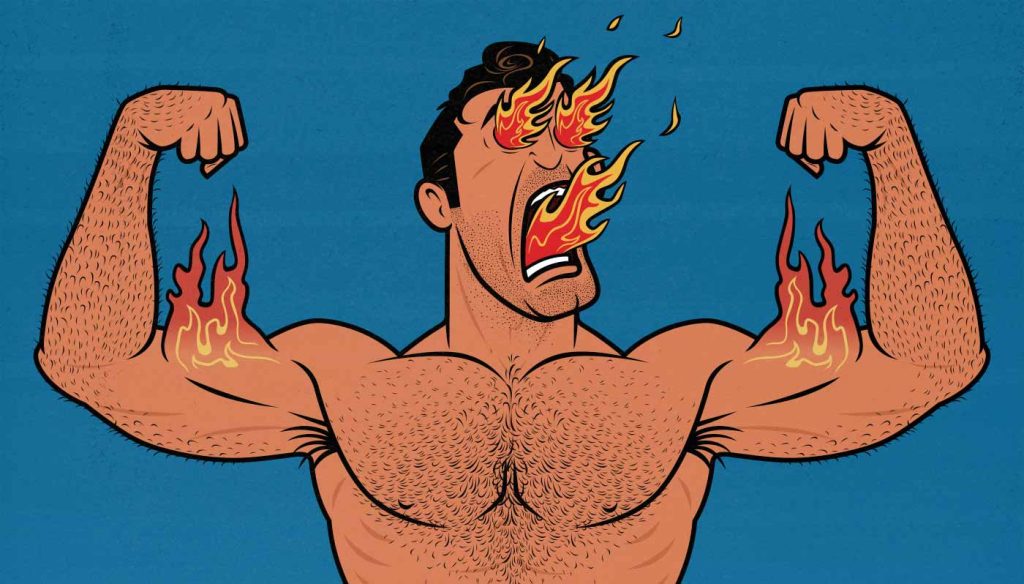 Is turkesterone a good supplement for building muscle? It’s been promoted everywhere lately—Joe Rogan, More Plates More Dates, Greg Doucette, and Vitruvian Physique have all talked about its benefits. The idea is that it can boost testosterone production, allowing us to build muscle faster and more leanly. But is there any good evidence to back those claims up? And if so, what kinds of results can you expect?

Our specialty is helping skinny guys bulk up. Cutting-edge supplements are a bit outside of our wheelhouse. That’s why we spoke with Eric Trexler, Ph.D. He’s got a doctorate degree in sports science, has published over 30 strength and hypertrophy studies, and professionally reviews research for Monthly Applications in Strength Sport (MASS). This is exactly his area of expertise. We also have a few studies to go over, and the official position of the International Society of Sports Nutrition (ISSN).

So, does turkesterone live up to the hype? Will it help you build muscle?

Turkesterone is a phytoecdysteroid, a chemical produced by plants (such as spinach) as a defence mechanism against insects. When insects consume the plant, the phytoecdysteroids make their shells fall off (moult), killing them. Kind of brutal. But on the other hand, ecdysteroid has the word “steroid” in it. So, as you might imagine, bodybuilders have started supplementing with it. And they aren’t totally wrong. Turkesterone is thought to be an agonist of the estrogen beta receptor, which could then boost testosterone, increasing anabolism, and thus increasing muscle growth. At least in theory.

That’s where turkesterone comes in. Turkesterone is a phytoecdysteroid, and it’s currently one of the most hyped supplements on YouTube. But does it work?

Is Turkesterone Good for Building Muscle?

A few studies found ecdysteroids (such as turkesterone) had performance-enhancing effects in birds and beetles (study, study). But the International Society of Sports Nutrition (ISSN) considers these studies unreliable because they weren’t published in reputable journals, the design of the studies was subpar, and the results were poorly presented. This is not the evidence we’re looking for. So, what about human trials?

There’s one study that’s often used to show the muscle-building benefits of supplementing with ecdysterone. It’s this paper by Isenmann et al. The results were impressive:

But the study is a little weird. The ecdysteroid supplements they were testing only contained 6% of the dosage listed on the label, which shouldn’t have been enough to produce an effect. But it did. At least according to the BIA scale they used to measure muscle growth. But BIA scales are a poor way of measuring muscle growth. So although these results are interesting, I’m skeptical, as are most experts.

There’s another study we can look at, though. The researchers used DEXA scans to measure muscle growth, which is a much more reliable tool. And in this study, the placebo group gained 2.2 pounds more muscle than the guys taking ecdysteroids, though the results didn’t reach statistical significance. This isn’t to suggest that turkesterone harms muscle growth, just that small studies often find differences between groups. These differences don’t necessarily prove anything. And in this case, the difference isn’t statistically significant.

Of the two papers, this second is generally seen as more credible, especially since DEXA scans are so much more reliable than BIA scales. As a result, the ISSN’s stance on turkesterone is:

Ecdysterones [including turkesterone] are not recommended for supplementation to increase training adaptations or performance.

The International Society of Sports Nutrition

It’s also worth pointing out that the above are studies on ecdysteroids, not on turkesterone specifically. At the moment, there’s no good research showing turkesterone is effective. But this isn’t our area of expertise. Maybe we’re missing something. So we reached out to Eric Trexler, Ph.D., for a more specific answer, asking him whether he recommends using turkesterone to bulk up.

Dr Trexler has published over 30 studies. Perhaps more relevantly, he also professionally reviews strength training and hypertrophy research, including doing brief reviews of the two studies above. Most recently, he broke down the research on turkesterone for the Stronger by Science podcast. He told me:

At this time, there is not sufficient evidence to suggest that turkesterone enhances increases in strength or muscle mass in humans.

If you’ve been in the fitness industry for a while, you know how these things go. Glutamine is the hot thing, then gets disproven. Then arginine. Then BCAAs. Then Tribulus. All of them were disproven. Supplement hype rarely lasts long, but while it does, millions of dollars are made from people yearning for an edge.

Is Turkesterone A Scam?

The next question is whether turkesterone supplements contain the ingredients they advertise in doses that could conceivably be effective. This is where the argument for turkesterone begins to break down even more.

The controversy began with Nootropics Depot, a lab that tests the quality of various supplements. They tested a few of the most popular brands of turkesterone, including the turkesterone sold by Gorilla Mind (owned by More Plates More Dates) and Harder Than Last Time (owned by Greg Doucette). They found that these supplements contained less than 1% of the turkesterone they advertised.

Nootropics Depot also sells its own supplements, including ecdysterone. This makes them a competitor to the brands who sell turkesterone. As a result, their claims were met with quite a lot of skepticism. However, when More Plates More Dates and Greg Doucette hired independent labs to test their own supplements, they were able to confirm that the turkesterone was fake. The supplements did indeed contain less than 1% of the turkesterone advertised on the bottle.

So it seems that even the anecdotal evidence in favour of turkesterone comes from people using fake turkesterone supplements.

There aren’t any good studies showing turkesterone will help you build muscle. In fact, the most relevant evidence shows that other ecdysteroids that are similar to turkesterone don’t increase muscle growth. There’s no evidence to show it’s dangerous, but also nothing to prove it’s safe.

Most of the hype surrounding turkesterone comes from the people who produce it, sell it, or make affiliate revenue from promoting it. There are few, if any, unbiased experts who believe it works. The most credible experts recommend against it.

Plus, at the time of writing, there’s no reliable way to even buy turkesterone. All of the biggest vendors aren’t able to reliably fill their capsules with even 1% of the turkesterone they advertise on the label. It’s one of the scummiest parts of the supplement industry, which is already rife with fraud.

With supplements, it’s wise to be a late adopter. There are a few good supplements with decades of research proving their effectiveness. These supplements are creatine, whey protein, and caffeine. These are the supplements you should turn to when you’re looking for better muscle-building results. And you don’t need any supplements to get great results. Much better to focus on hypertrophy training, eating a good bulking diet, and getting enough good sleep.