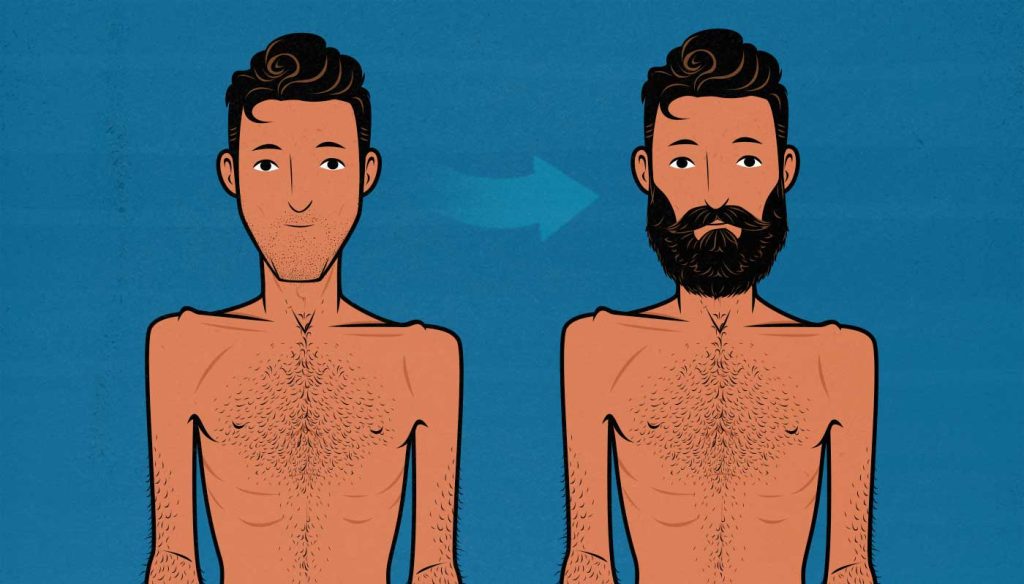 There’s no doubt that genetics play a role in building muscle. In fact, especially when looking at outliers, genetics can have an enormous impact. If two people do the same workout routine and eat the same bulking diet, one of those people might gain twice as much muscle.

What’s more contentious is the claim that some people can’t build muscle at all. And there’s some truth to that idea. When most people start lifting weights, they build muscle. But not everyone. And these people who don’t gain muscle have been referred to as “non-responders” or “low-responders” in the research.

So what’s going on here? Weight training is supposed to cause us to adapt by gaining muscle size and strength. Why do some people fail to adapt?

A non-responder (or low-responder) is someone who doesn’t gain much muscle after following a workout routine for a given amount of time. Maybe after lifting weights for ten weeks, the average person gains five pounds of lean mass, but one guy loses a pound. He’s a non-responder.

Non-responders and low-responders are real scientific terms. Researchers really do classify participants that way. But it’s not a comment on someone’s muscle-building genetics, it’s just a way of sorting the results of a particular study.

This makes logical sense. In the year I got married, I lost 15 pounds. So did my wife. And since we were already lean, almost all the weight we lost was muscle. We were exercising during that period, it’s just that we were stressed. We were in the middle of planning a wedding, my wife’s father passed away suddenly, and then my wife got pregnant later that year. It was a crazy year, filled with joy and sorrow and change.

But after successfully getting married, and with the pregnancy going well, the stress evaporated. We gained back those 15 pounds of muscle within a few months. Well, my wife gained more than that, obviously. She was pregnant. But she recovered all of the muscle she’d lost as well.

Now imagine what would’ve happened if we’d been participants in a muscle-building study. If that muscle-building study had been conducted during the stressful year, my wife and I would have been classified as hopeless non-responders because of our tragic loss of muscle. But if the study had taken place the following year, we would’ve (re)gained tremendous amounts of muscle. We would’ve been classified as genetically elite high-responders.

Are You A Non-Responder?

If you try to build muscle and fail, you were a non-responder. But that doesn’t mean you’ll respond the same way next time. Being a non-responder has less to do with genetics, more to do with lifestyle, circumstance, diet, stress, and sleep.

Genetics do influence how easily, quickly, and leanly we build muscle. Two guys doing everything the same might still build different amounts of muscle. This is especially true if you take someone with elite genetics and compare them against someone with atrocious genetics. In fact, even if a guy with elite genetics eats a poor diet, inconsistently follows a bad workout routine, and parties every night, he might still get better results than a guy who does everything perfectly (provided they both eat enough food to build muscle).

The thing to keep in mind, though, is that elite and atrocious genetics are rare. You probably don’t know anybody with elite genetics. You probably don’t know anyone with terrible genetics either. You probably know people with good, mediocre, and bad genetics. And within that normal range, the differences aren’t nearly as extreme. We’re talking about some guys gaining 10–20% more muscle than average (easy-gainers), other guys gaining 10–20% less muscle than average.

In most cases, genetic differences are enough to notice, but they’re rarely enough to stop someone from becoming respectably lean and strong. Most guys can (eventually, with hard work) squat at least 315 pounds, bench at least 250, and deadlift at least 405, even if their genetics are fairly bad. And if your genetics are mediocre, you can bump that up to squatting 405, benching 315, and deadlifting 495 (give or take 50 pounds).

Why Do Some People Fail to Gain Muscle?

It’s common for people to start working out, fail to get results, and then assume they’re non-responders. More often than not, it has nothing to do with their genetics, it’s just that something in their bulking routine is missing or needs to be adjusted (study).

For instance, there’s a 2018 study by Vargas et al. looking at how the ketogenic diet affects muscle growth. They found that the group eating a ketogenic diet lost 0.7 pounds of muscle while the group eating a traditional diet gained 3 pounds. Both groups were following the exact same workout routine, but because of dietary differences, some participants gained far more muscle than others. Many muscle-building studies don’t control for diet, and so many of them miss out on dietary differences causing different amounts of muscle growth.

In this case, the reason the keto group lost muscle is that they weren’t able to get into a calorie surplus. They were losing weight. And if you lose weight, it’s very difficult to build muscle, especially if you’re already lean. This is a very, very common issue with us skinny guys. It’s hard for us to gain weight, and so it’s hard for us to build muscle. There’s even a special word for us: hardgainer.

How Can You Build Muscle More Reliably?

If you’re following a hypertrophy training or bodybuilding routine and you’re having trouble gaining muscle, the first thing you should do is make sure that your diet and lifestyle are on point:

Once you’ve got your lifestyle handled, the next thing to look at is your workout routine.

If you fail to build muscle, don’t consider it a failure, consider it a lesson. The variables you were using weren’t working. What variables can you change to give yourself a better chance at succeeding?

A non-responder is someone who doesn’t gain muscle after following a workout routine for a given period of time. However, it doesn’t account for diet, lifestyle, or circumstance. When those other factors are accounted for, genetic differences do persist, but everyone can successfully build muscle.