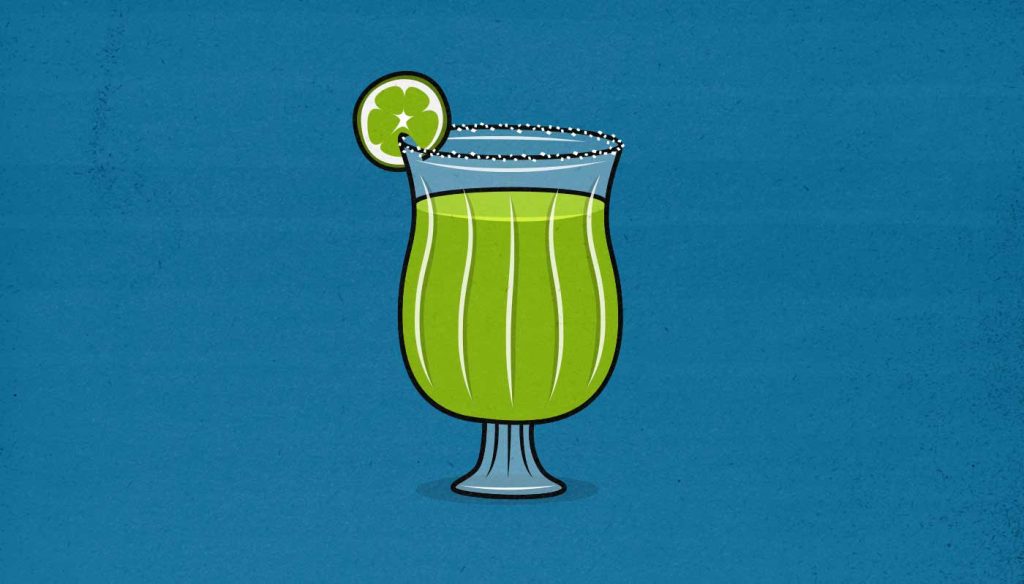 Maybe you’ve heard that beer builds beer bellies, that alcohol can tank our testosterone production, or that drinking too much can impair muscle growth.

All of this is true. In fact, it gets worse. Alcohol can also disrupt our sleep, which can further reduce muscle growth, cause extra fat gain, and harm our workout performance.

However, these aren’t the effects of drinking, these are the drinking too much. As with most good things in life, it’s the dose that makes the poison.

Maybe you’ve even heard that having a drink or two per day is better than having none. Is that true?

How Much Alcohol is Healthy?

However, the mechanisms aren’t properly understood, there are also some downsides to moderate drinking, and it’s possible that it’s just a correlation anyway. Perhaps people who have a drink or two per day tend to eat healthier diets or engage in more social activities. So despite how prevalent drinking is, we don’t have a clear understanding of its impacts on our health yet.

With that out of the way, here are the best recommendations we could find:

All of these expert recommendations have a few things in common:

In terms of general health and fitness, I think these recommendations are wise. Now, that doesn’t mean that you can never have a third beer, just that the third beer might not be perfectly ideal for your health. The harms really start to show up once you go beyond 3.5 daily drinks, though.

In David and Goliath, Malcolm Gladwell used alcohol as an example of the inverted-U curve:

A classic inverted-U curve can be seen in the relationship between alcohol consumption and health. If you go from not drinking at all to drinking one glass of wine a week, you’ll live longer. And if you drink two glasses a week, you’ll live a little bit longer, and three glasses a little bit longer still – all the way up to about seven glasses a week. (These numbers are for men, not women.) That’s the upslope: the more, the merrier.

Then there’s the stretch from, say, seven to fourteen glasses of wine a week. You’re not helping yourself by drinking more in that range. But you’re not particularly hurting yourself either. That’s the middle part of the curve. Finally, there’s the right side of the curve: the downslope. That’s when you get past fourteen glasses of wine a week and drinking more starts to leave you with a shorter life. Alcohol is not inherently good or bad or neutral. It starts out good, becomes neutral, and ends up bad.

The type of alcohol that we drink is called ethanol. It’s formed from the fermentation of dense carbohydrates, such as barley (beer), grapes (wine), and agave (tequila). However, alcohol isn’t itself a carbohydrate.

Alcohol is the fourth macronutrient, and it contains 7 calories per gram. However, most of the calories in alcohol will be burned off as body heat. Whiskey really will keep you warm.

That somewhat negates the fact that alcohol packs a heavy punch calorically. However, this property isn’t unique to alcohol. The same is true with higher protein diets, and, to a lesser extent, higher carb diets.

Mind you, skinny guys who lift weights almost never have problems with insulin sensitivity. And besides, this effect is quite mild. Still interesting, though.

Alcohol is absorbed by our entire gastrointestinal tracts (GI). How quickly it’s absorbed depends on how much food we have in there already. Having alcohol during or after meals causes it to seep into your bloodstream more slowly, allowing you to better tolerate more of it before feeling its effects.

I was reading Malcolm Gladwell’s new book, Talking with Strangers, and he was saying that college students should learn to eat before they go out drinking. That way they aren’t blindsided by drunkenness after having a couple of beers. (Gladwell, like us, is Canadian, and the legal drinking age here is 18–19. Most university students here can legally drink.)

Just like food slows alcohol absorption, so too does alcohol slow our digestion. As our body is focused on getting rid of the alcohol, our digestion can slow, which can leave us feeling full for longer.

This certainly isn’t a problem for everyone, but it’s hard to enough calories while bulking. If you’re having trouble eating enough, we’ve got an article on eating more calories. We’ve also got a list of great bulking foods.

Alcohol is Burned Off Quickly

No matter how much food we have in our system, though, alcohol gets priority. Our liver loves to use alcohol as fuel. Perhaps because it’s eager to get rid of this poison we’ve ingested.

An interesting byproduct of that, though, is that it’s nearly impossible for alcohol to be stored as fat. Our liver is too good at metabolizing it.

There’s an enzyme called liver alcohol dehydrogenase (LADH) that limits the amount of ethanol we can oxidize. A typical 155-pound man can oxidize one “drink” per hour. A drink is classified as 15 grams of ethanol, which is:

Alcohol won’t be converted into any significant amount of fatty acids, so this isn’t necessarily a problem… unless you’re also eating other things.

Now, with drinks like beer and margaritas, there’s both alcohol and carbohydrates in there. That’s not likely to cause fat storage either. Like alcohol, carbs aren’t easily stored as body fat.

However, if you go out for midnight poutine after having those beers and margaritas, the fats in your meal can be stored as body fat. Plus, those alcohol and carb calories you have in your system will only run you deeper into a calorie surplus, causing more weight gain.

Alcohol Can Cause Nausea

You can feel nauseous after drinking because alcohol produces toxic byproducts called acetaldehyde and acetate. These are, in a sense, anti-alcoholism toxins. In small quantities, you won’t notice them. But if you drink too much, you’ll feel an aversion to alcohol in the future. At least for a while.

If you’re drinking responsibly, this won’t be an issue. It’s rare for 1–2 drinks to produce this effect. However, if you drink too much, it can certainly make it harder to eat enough to gain weight.

Alcohol can make people feel sleepy. It can even help people fall asleep. However, it prevents people from sleeping properly. That’s why it’s so common for people to sleep in after drinking, and yet still feel exhausted.

What’s happening is that alcohol is making us produce gamma-aminobutyric acid (GABA), which makes it easier to fall asleep, but harder to fall into a deep sleep. It’s during our deep sleep that many of the benefits of rest occur.

As a result, most sleep experts recommend avoiding alcohol consumption within a couple hours of going to bed. For instance, having a drink or two before or during dinner probably won’t interfere with our sleep, but it might be best to stop drinking after that.

For more, here’s our article on how to improve your sleep.

In my eight years of lifting, I’ve only thrown up twice. Once was when I was doing a military fitness test, the other was when I showed up at the gym hungover. In both cases, it was high-rep squats that did me in. My cardiovascular system just couldn’t handle it.

What’s interesting is that our strength holds up pretty well. Doesn’t matter if you’re hungover or not, a bigger muscle can produce more force. It’s really only our cardiovascular systems that take the hit. Sets end too soon, we need longer rest times, and we might have trouble finishing long workouts.

I started bulking up in my early twenties, and most of my bad workouts were the result of poor sleep caused by too much alcohol. It doesn’t take much. Have a few beers with friends, come home late, sleep fitfully, and then show up to the gym already exhausted.

The research looking into alcohol and testosterone is confusing at first.

Now, what you might think is that this is just an example of a dose-response relationship. A little bit of alcohol boosts testosterone, whereas too much alcohol reduces testosterone. That’s true. Kind of.

So, first of all, having ten drinks isn’t good for you or your gains. The drop in testosterone is bad, but that’s just one of several problems.

However, whether you’re having one or three drinks per night, it won’t really have a big impact on your testosterone. These are fairly small and transient changes.

However, this effect has only been found in alcoholics with a condition called chronic alcoholic myopathy (study). Alcoholics without that condition are able to maintain their muscle mass without issue (study).

New research shows that consuming a moderate amount of daily beer or alcohol doesn’t impact the cardiovascular, strength, or performance adaptations we make when doing high-intensity interval training (HIIT). Hypertrophy training (aka bodybuilding) is technically a form of high-intensity interval training, so this should apply when training specifically for muscle growth as well. Fortunately, we also have a systematic review that evaluated the effect alcohol has on resistance training adaptions, and, yeah, there doesn’t seem to be any significant negative impact from having 1–2 drinks.

To summarize, having a drink or two in the evening probably won’t have any measurable impact on muscle growth.

The main way that alcohol will prevent you from building muscle is by sabotaging your compliance. Here are some things to watch out for:

These mistakes can limit your muscle growth, but they have more to do with your habits surrounding alcohol than the alcohol itself.

Now, keep in mind that the difference between 90% and 100% compliance is negligible. It’s only when the occasional indulgence becomes a habit that you’ll start to notice your fitness goals sprinting off into the distance while you’re left gasping for breath.

You can enjoy a good beer in the evening while bulking. There’s no reason to think it will reduce your testosterone, stunt your muscle growth, or cause extra fat gain. Just don’t make a habit of binge drinking, staying up past your bedtime, or showing up to the gym feeling haggard.