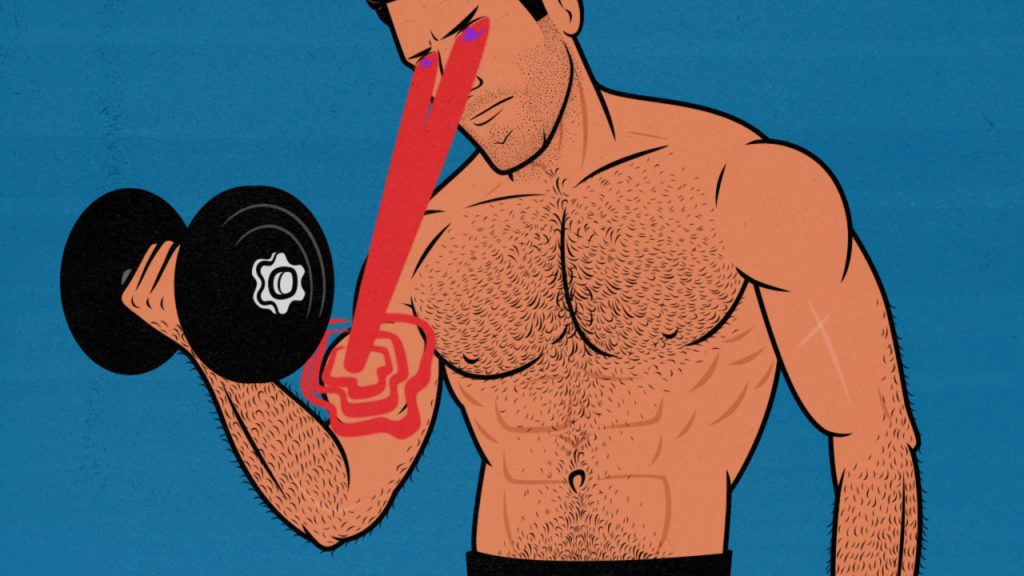 On the other hand, most people who train for strength and power couldn’t care less about the mind-muscle connection. Even when they’re trying to bulk up, they lift explosively to maximize performance. To them, tension doesn’t come from the mind, it comes from the weight on the bar and how fast they can move it.

The argument for the mind-muscle connection is anecdotal. It comes from bodybuilding culture. But if we look at all the biggest and strongest people in the world, the anecdotes and recommendations really go both ways. That makes things tricky. Should we listen to the bodybuilders or the strength athletes? Both?

Fortunately, there are two studies that help shed some light on the situation.

If you’d rather watch than read, I made a video version of the article, too. Both contain the exact same content and references, so go with your preference.

The main study that everyone cites is a 2018 paper by Schoenfeld and colleagues. Schoenfeld is one of the most prolific and well-respected hypertrophy researchers in the world, so when he publishes a study, it sends tidal waves crashing through the muscle-building industry. This one certainly did. In fact, it’s usually used as the entire evidence base for the mind-muscle connection.

In this study, the participants were split into two groups. The first group was the mind-muscle connection group, and they were told to “squeeze” the target muscle while doing barbell curls and leg extensions. The second group was told to just “get the weight up,” which is a weird cue, but we’ll get to that in a second.

The results of the study are really interesting. The mind-muscle connection group gained twice as much biceps size as the group that was just focused on getting the weight up. But the participants weren’t just doing barbell curls. They were also doing leg extensions. When it came to quad growth, the mind-muscle connection made no difference. Both groups grew the same amount of muscle in their quads.

The researchers speculated that most people are better at squeezing their biceps than their quads. And that could very well be true. Maybe that explains the difference. Maybe the trick is to practice your mind-muscle connection until you get benefits from it with every muscle.

Then, when it comes to leg extensions, there isn’t really a way to cheat them. You’re locked into the machine. Whether or not you focus on squeezing your quads, you need to flex them to move the weight. And in this case, with or without a mind-muscle connection, both groups gained the same amount of muscle in their quads.

But there’s another good study we can look to. Not only did they use the same two cues as this one, but they also added a third cue—the cue that powerlifters, Olympic weightlifters, and athletes actually use.

In this study by Catalayud and colleagues, the researchers tested three different cues during the bench press. They had all of the participants test all three cues. Each time, they measured muscle activation in the chest and triceps.

When people were told to just get the weight up, muscle activation was lower, lining up with the results of the first study.

When the participants were told to focus on the mind-muscle connection, they got slightly better muscle activation in the target muscle. Again, just like in the first study.

But when the participants were told to lift the weight athletically, explosively, moving it as fast as they could, they got even better muscle activation than the group focused on the mind-muscle connection.

The results of this study line up with my own personal experience. When I lift explosively, I can lift more weight, I feel like I’m working my muscles harder, and it seems to take fewer sets to give me the same amount of muscle stimulation. I get more sore, progressive overload seems to go more smoothly.

Is Emphasizing a Particular Muscle Even Good?

In the second study—the bench press study—the participants were able to shift a tiny bit of emphasis either towards their triceps or their chests by focusing on the mind-muscle connection. That’s interesting, and I can imagine it being useful in some cases, but the group lifting explosively got better muscle activation in both muscle groups.

The recommendation I usually hear is that on compound lifts like the bench press, it’s better to lift explosively, whereas, on simple isolation lifts, it’s better to focus on the mind-muscle connection. And I think that’s pretty good advice. Depending on how you interpret the research, it lines up fairly well. It also means you’ll be doing your compound lifts like an athlete and your isolation lifts like a bodybuilder. You’ll get the best of both worlds.

Mind you, that interpretation doesn’t take into account the fact that the mind-muscle connection didn’t matter for leg extensions. And leg extensions are an even simpler isolation exercise than barbell curls. Plus, we have a growing body of evidence that lifting explosively is better for building muscle, gaining strength, and improving power output. So my takeaway is a little bit different. I lift explosively as my default way of lifting, even on my isolation lifts.

With all of that said, though, you can experiment with lifting explosively and with establishing a stronger mind-muscle connection. Maybe there’s even an advantage to getting good at both styles of training.

However you decide to lift, just don’t sight of the fundamentals. As long as you’re pushing yourself close to failure, and as long as you’re progressively overloading your lifts over time, you’ll do great, even if you experiment with different styles of lifting.