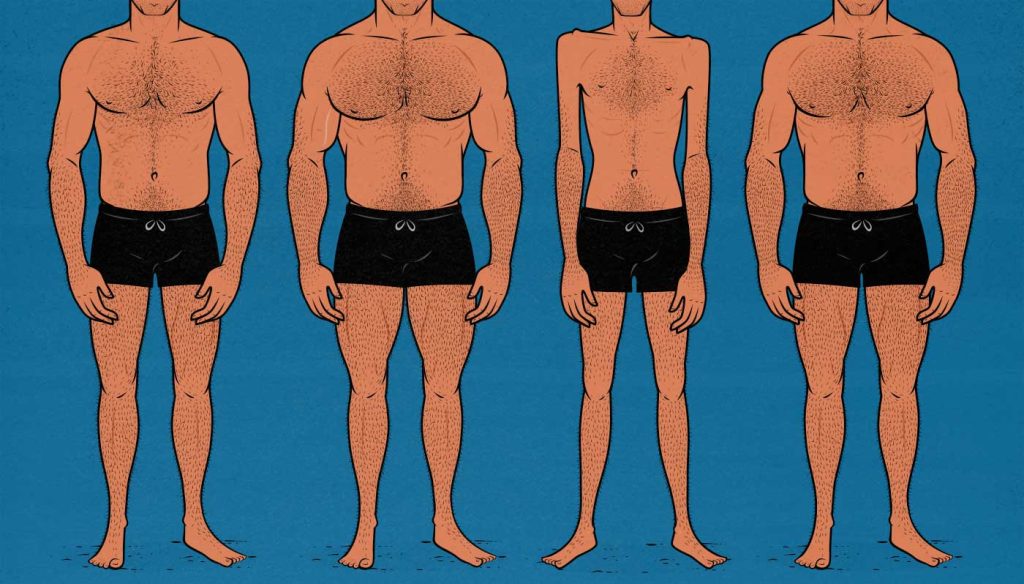 We surveyed 423 women, asking them to rate varying degrees of muscularity and leanness in men, as well as asking them about their favourite muscle groups and ideal proportions. In this article, we’ll go over the results:

Here are the survey results.

We surveyed over a thousand people, asking them about which physiques they preferred. We focused entirely on mutable traits, such as muscle mass, muscle proportions, and body-fat percentage. We weren’t interested in things like height, bone structure, or muscle insertions, given that there’s nothing we can do with that information anyway.

In this article, we’re focusing on which bodies the 423 straight women rated as being most attractive. The bodies weren’t labelled or ordered. For example, we asked, “Which degree of muscularity do you find most attractive?” and then showed them this spread:

Note that we specialize in helping skinny people build muscle. Most women who filled out our survey are thin, exercise, and eat well. 76% of them are American, and 82% are between the ages of 18 and 39. This doesn’t line up perfectly with the general population. It could be, for instance, that because the average woman is heavier, she prefers heavier men.

Another limitation is that when men gauge their muscularity, they pose, making themselves look as lean and muscular as possible. Presumably, women aren’t judging men in their most muscular poses; they’re judging them based on how they look in everyday situations. Guys who look “too” muscular when pumped up posing with their shirts off might look ideal in a t-shirt. Guys with chiselled abs in the bathroom mirror might have a flat stomach when they’re on the beach. Still, I think we can get an idea of what kind of look women find most attractive.

We didn’t ask women to select all attractive bodies; we asked them to select the body they found most attractive. For all we know, women might have found all of the options attractive, just in varying degrees.

To test the accuracy of these illustrations, I had my wife guess which degree of muscularity lined up with mine. She said that I looked most like “Body 4.” She was right. “Body 4” is a tracing of mine, with the pose and symmetry slightly adjusted and the chest shrunk down a bit.

The Most Attractive Degree of Muscularity

When we asked women which degree of muscularity they were most attracted to, there was a fairly even split between the “athletic” and “strong” body types, with 51% of women voting for the athletic build and 43% voting for the strong build. (Note that I didn’t label the bodies in the survey. Women chose “body 1.” But I’m labelling them now to make it easier to talk about the results.)

There were no votes for the skinny body type, and only 6% of women voted for the strongest body type. This lines up with our previous survey and with attractiveness research overall (study). However, there’s one notable exception. In this study by Dr. Sell et al., there was a linear relationship between strength and attractiveness. The stronger a man was, the more muscular he looked, and the more attractive he was rated. According to Dr. Sell’s results, we’d expect the most muscular man to be the most attractive.

There are a few possible explanations for why women chose the physiques that weren’t maximally muscular:

The Most Attractive Degree of Leanness

Some guys with favourable genetics can maintain their general health and mood while having year-round abs (8–10% body fat). Still, it’s somewhat rare, and it’s common to run into issues such as low testosterone, fatigue, and perpetual hunger when trying to maintain a low body-fat percentage. Women preferred men closer to 13% body fat, which is still much leaner than average but tends to be healthier and more sustainable. This aligns well with our previous survey results and the overall body of research (study).

Men had a strong preference for having a lower body-fat percentage, with 74% of men saying they preferred the body with abs. So once again, men want a more extreme physique than women prefer.

The Most Attractive Male Body Proportions

The next thing I wanted to look at was upper-body vs lower-body proportions. It’s common for men to prioritize their chests, shoulders, arms, and upper backs, building proportionally bigger upper bodies. But is that what women actually find most attractive?

It seems that a slight majority of women prefer a balanced, athletic body. Some women, though, prefer when extra attention is given to either the lower or upper body. Nothing crazy here, but perhaps it hints that putting extra work into our upper bodies is misguided. (More on this in a second.)

The next spread showed a side angle, this time comparing upper-body muscles against butt size. 55% of women rated the physique with the strongest butt as the most attractive. 38% chose the physique with a larger upper body and a slightly smaller butt.

Which Muscles Should Men Prioritize?

Here’s where things get interesting. The above photos suggest that women prefer a balanced approach to building muscle, right? It doesn’t look like women are choosing bodies that have any special emphasis on the mirror muscles: the chest, arms, shoulders, and abs… right?

When we asked women which muscles men should give the most emphasis, they chose arms first, then chest, then shoulders, and then abs. These are the exact muscles that men are notorious for prioritizing in the gym, and they line up exactly with what women say they prefer.

The thing is, women prefer a lesser degree of muscularity than men. When women think of “big” arms, they’re thinking of the 14-inch arms that Cristiano Ronaldo has. When the average man thinks of big arms, he’s thinking of the 15-inch arms that Brad Pitt had in Fight Club. And the average recreational bodybuilder is thinking of Arnold Schwarzenegger’s 19-inch arms. Everyone is in agreement that having big arms and a big chest looks great, it’s just people disagree about how big we need to build those muscles.

It seems that when guys prefer the bench press and biceps curls, their preference lines up fairly well with what women prefer. Again, it’s just that men want to build a more muscular physique than women prefer. It’s a difference of degree, not proportions.

This specific question is the main reason I wanted to do this survey. I couldn’t find any research on how neck size impacts attractiveness, nor about how big our necks need to be to look good. I have a naturally thin neck, and I’ve recently added a couple of inches to it. I feel like it’s had a great effect on my appearance, but my wife doesn’t seem to care. I was curious.

These results surprised me. It seems that most attractiveness research points to more formidable men being rated as more attractive. Having a thicker neck is an important part of formidability, so I had a feeling the athletic neck would be rated as the most attractive. And it was. It was rated as most attractive by 53% of women. But it didn’t win by as much as I expected it to. 42% of women preferred men with thinner necks!

When we surveyed our male audience, 9% said they were considering taking steroids to help them build muscle. When looking at the most popular fitness and bodybuilding influencers on Instagram, TikTok, and YouTube, many are taking performance-enhancing drugs, ranging from steroids to TRT to SARMs.

79% of women said if a man took steroids, they wouldn’t date him. 20% said it was unattractive, but they might still consider dating him. Out of the 423 women we surveyed, only two said it was attractive for a guy to stake steroids. Overall, over 99.5% of women have at least a moderate preference against men who take steroids.

72% of men said they preferred how natural lifters looked. (This answer is somewhat incorrect. Steroids make achieving any degree of muscularity and leanness easier. For instance, some guys use steroids or TRT so that they can get shredded without suffering from the symptoms of low testosterone. Plus, not all steroid users are bigger, leaner, or stronger than natural lifters.)

Also, all of the physiques rated as most attractive to women don’t require steroids to achieve, even for men with poor genetics. Even the bodies rated as ideal by men are naturally achievable by most guys.

The last thing I wanted to test was whether skinny or skinny-fat guys were at a greater disadvantage. I wanted to test this because many of our skinny clients are worried that if they do a poor job of bulking up, all they’ll gain is fat, and so they’ll wind up with a worse physique than when they started.

This lines up with my own experience. As a skinny guy, I was teased all the time. But after a failed bulking attempt where I got a bit doughy, I became more similar to the average guy, and far fewer people bugged me about it.

For more on this, I made a YouTube video on skinniness vs skinny-fatness and what you should do.

Women tend to prefer men with fit, athletic bodies. These ideal male bodies are significantly leaner and stronger than average, but not as lean and strong as most men wish to be, and certainly not as muscular as most bodybuilders. Think of the bodies of soccer players, rugby players, and mixed martial artists.

Men, on the other hand, prefer leaner and more muscular physiques. Most men preferred abs, which isn’t necessarily ideal for our health and is often tough to maintain year-round. Men also prefer a degree of muscularity at the upper limit of what’s realistically achievable as a natural lifter.

Overall, though, the bodies that women find most attractive are similar to the bodies that men want to have, even down to the muscle proportions that men tend to emphasize in the gym: arms, chest, shoulders, and abs.