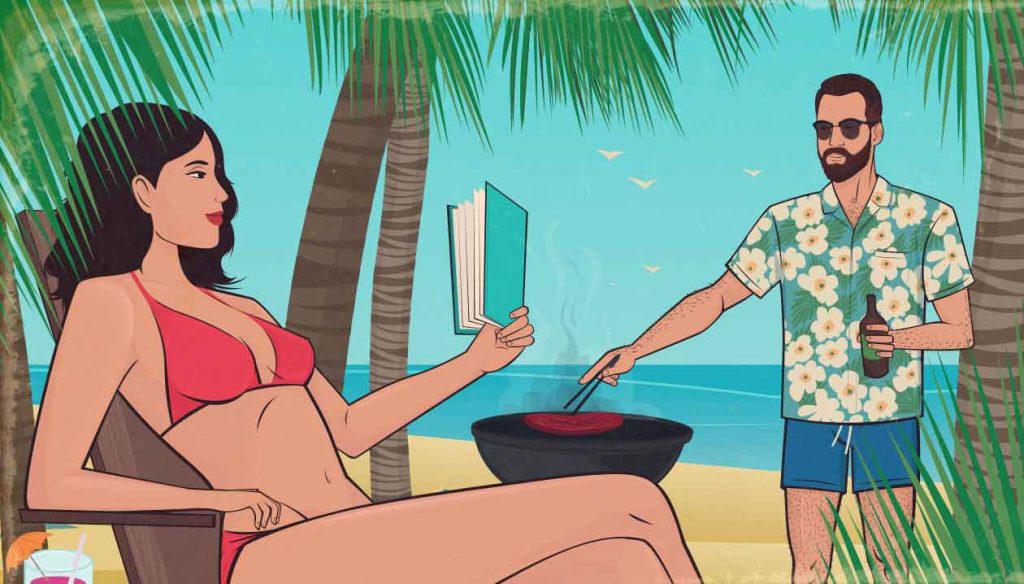 You’re eager to build up a more muscular physique, and things are going super well. But lo and behold, disaster strikes. And not just a run of the mill muscle disaster, like running out of milk, but the worst kind of disaster imaginable: a vacation.

I bet just the mention of a vacation has your heart racing, your mind spiralling down into the depths of pure terror. Unfortunately, I’ve been there too. I know what you’re thinking:

In desperation, you might start googling around to learn more, but since only 3% of the population is trying to gain weight, good luck trying to find an article for people who are worried about losing weight while travelling.

So what do you do? Cancel your vacation? 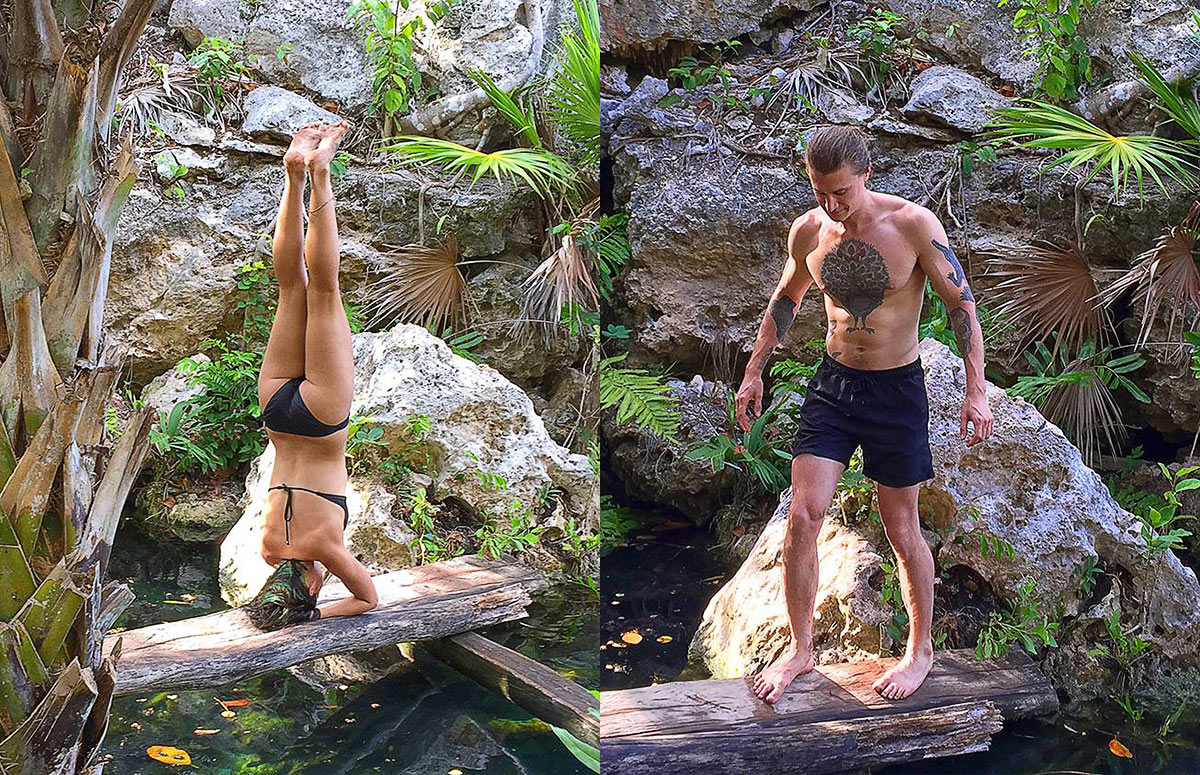 I got back from Mexico a few weeks ago. Above you can see my  wife and me in a cenote having a balancing competition. (It was a tie.) After a couple weeks of eating tons of delicious seafood and tacos, walking 5-6 hours most days, and having at least a couple drinks most nights, I came back just as muscular and finally looking like the 1/4 Cuban that I am (i.e. still 3/4 pale).

Even though we base our articles on research rather than anecdotes, we still like to walk the walk before writing about something. Luckily, the three of us get the opportunity to travel fairly often. Jared just got back from a small little island in Northern Canada, and Marco recently went hiking through Peru.

It’s about time we write about one of the most commonly asked question we get: “Will I lose all of my muscle if I go on vacation? How do I stop myself from losing weight?”

First of all, there’s this misconception that being a strong healthy dude makes it harder to travel. That couldn’t be more wrong. Being a strong healthy dude makes travelling so much better. You’ve got muscles that can carry around a whole family’s worth of luggage without breaking a sweat, you have the cardiovascular fitness to race your partner up the pyramids (and win), you have the rugged immune system that resists catching a cold on the airplane, the energy levels for every adventure, and the brainpower to think clearly even when jet-lagged.

Lifting and eating well in your day-to-day life makes travelling radder. So if you’re at a point where you’re healthy and happy with your body, great—you don’t really need to worry about much while on vacation. Just have fun, be active, eat delicious food, go back to your bulking routine when you get back.

This article isn’t about that though. You’re probably a guy who’s still trying to get bigger and stronger. This article is about building muscle while you’re travelling, not just being a strong and fit dude while travelling.

First, let’s get the bare basics out of the way:

With that covered, we can get to the interesting stuff. To cover the elusive science of what happens to muscle when travelling, we brought in the big guns—Armi Legge.

Armi has long been known in the fitness industry for being one of the best researchers out there. He’s a bit of a controversial figure in the best way, because he’s a young guy who’s not afraid to stand up to some of the most influential guys in the industry when they get their facts wrong.

Recently, he wrote up a piece in Alan Aragon’s Research Review (which  was perhaps the most respected research review in the fitness industry). As luck would have it, that article was about building muscle while travelling. In fact, Armi’s latest area of research has been everything related to muscle, fitness and travel.

We used this as an opportunity to help you out (since he’s done a ton of research into this), and it’s also a chance for him to talk about his rad new eBook about staying fit, strong and lean while travelling.

Without further ado, here are my questions, with his answers in blue.

What will happen if we lose weight while not lifting? We’re naturally skinny guys. Airports, carrying luggage around, strolling around exciting new cities, being way too far away from a refrigerator, needing to get most of your meals from restaurants, etc. This all means calories burned + fewer calories eaten. The perfect storm for tons of weight loss.

Armi: If you lose weight without lifting, then you’ll mostly lose fat, along with some muscle. The larger your calorie deficit, generally the greater your risk of muscle loss. The amount of muscle you lose is largely dependent on your genetics, although the absolute differences between people tend to be pretty small.

Most research also shows that eating a higher percentage of your diet from protein can generally help you retain more muscle while under-eating. So if you don’t lift weights and you under-eat, make an effort to get in slightly more protein.

If you gain weight, you’ll gain some muscle and fat. That’s something most people don’t realize—any calorie surplus, even if you aren’t lifting weights, generally causes some muscle growth. The problem is that a lot more of the weight tends to come from fat. But since you’re reading this, under-eating is probably more of an issue for you than over-eating.

Okay, so let’s say I decide to go traveling and don’t plan on lifting at all. I do a pretty hearty full body workout the day before leaving. How long before my muscles begin to atrophy if I were to eat enough to maintain my bodyweight? And does it matter? I mean, how much muscle loss are we talking about, and how hard will it be to regain?

Armi: I’d say you’d have at least two weeks or so before you started to lose muscle, assuming you were eating enough to maintain your weight. You’d probably lose a little strength after a week, but that would mostly be neurological—feeling rusty. After a few workouts you’d be back to your normal self.

The second part of your question is really interesting. I’d say that a week or two without training isn’t that big of a deal, assuming you don’t do that every month. You might lose some muscle and strength, but you’ll gain it back much faster. It’s easier to regain or maintain muscle mass than it is to build it in the first place. This is partly due to satellite cell activation.

In a nutshell, when you lift weights, special stem cells called “satellite cells” donate their myonuclei to your muscle cells. That extra nucleus helps the muscle support a slightly larger area, and your muscles get bigger. The interesting thing is that those myonuclei stick around even if your overall muscle size shrinks. When you start lifting again, it’s generally easier to shoot back up to your previous size, partly thanks to those new myconuclei.

There have been a few studies on this, too. In general, 3-6 weeks off from training will cause around a 6-12 percent drop in strength. That’s really not much when you consider how long these people weren’t training. In these studies, muscle mass didn’t change much after 4 weeks. There probably was a drop in muscle mass, but it was small enough that it wasn’t measurable.

I’d say that if you’re traveling for two weeks or less, it’s okay to stop training completely. If you’re traveling for more than two to four weeks, you can probably expect to lose a moderate amount of muscle mass and strength. It’s hard to say exactly how much, but probably not enough to have a significant impact on your appearance.

When you get back into training, you’ll regain your lost strength and size much faster than when you had to build it in the first place.

But, I think it’s still a good idea to do at least a little strength training while traveling for another reason—habit formation. Even if you just do a 10-minute bodyweight workout twice a week, that helps you maintain the habit of working out. When you come home, it will be much easier to get back into your normal training schedule.

In short, you can maintain your muscle mass and strength without training for longer than most people think.

Is there anything in particular you’d recommend for a naturally skinny guy who wants to not just maintain, but build muscle while travelling? (Keeping in mind that our tendency is to accidentally lose weight while travelling.)

Armi: Great question. I tend to default toward under-eating too, so this is something I’ve thought about. Here are a few strategies that work well for me:

So, will you lose all of your muscle while travelling?

No, you won’t lose all of your muscle while travelling. The best advice is usually to take a well-earned break and then just get back into your lifting routine when you get back.

However, if you want to build muscle on vacation, I hope these tips help. I also hope they help ease the stress of venturing outside of your regular bulking routine. The worst thing is getting into a good healthy lifestyle and then thinking that you can’t take your body anywhere anymore. You can. A strong healthy body is less fragile and more versatile than a weak one.

Have a great vacation, man!

Shane Duquette, BDes, is a writer and illustrator with a degree in design from York University. He co-founded Bony to Beastly and Bony to Bombshell, where he specializes in helping skinny people bulk up. More about Shane here. 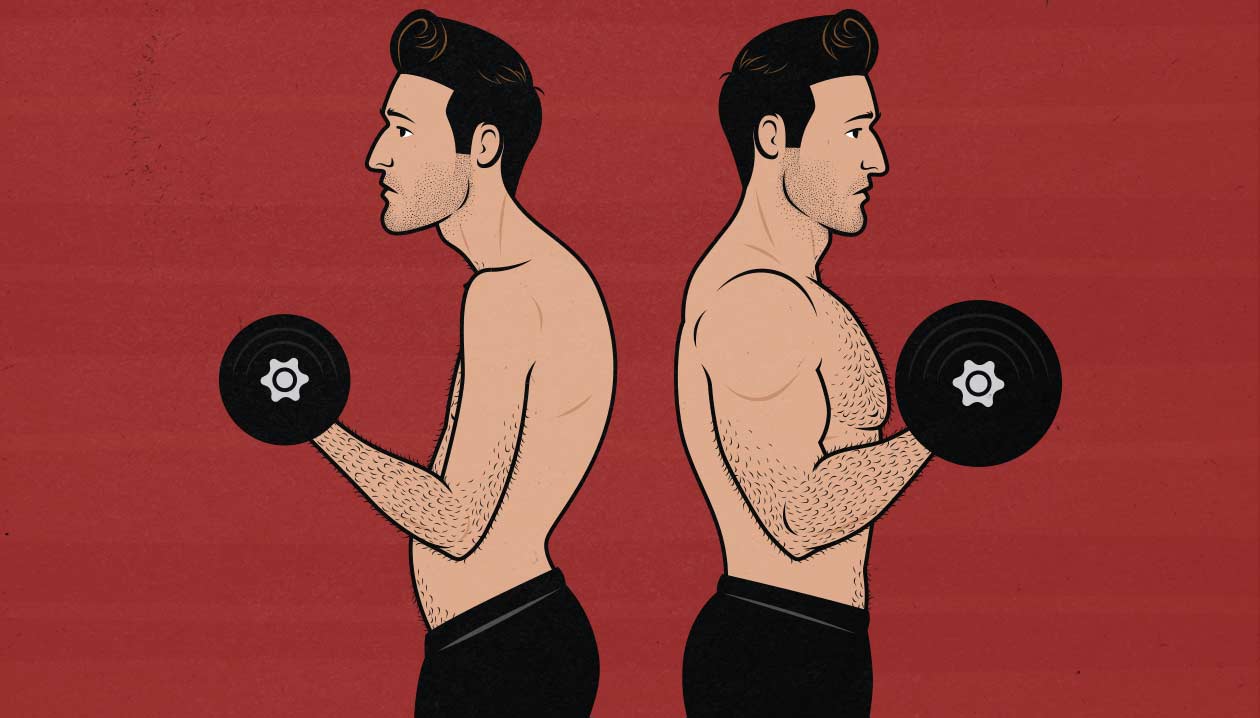