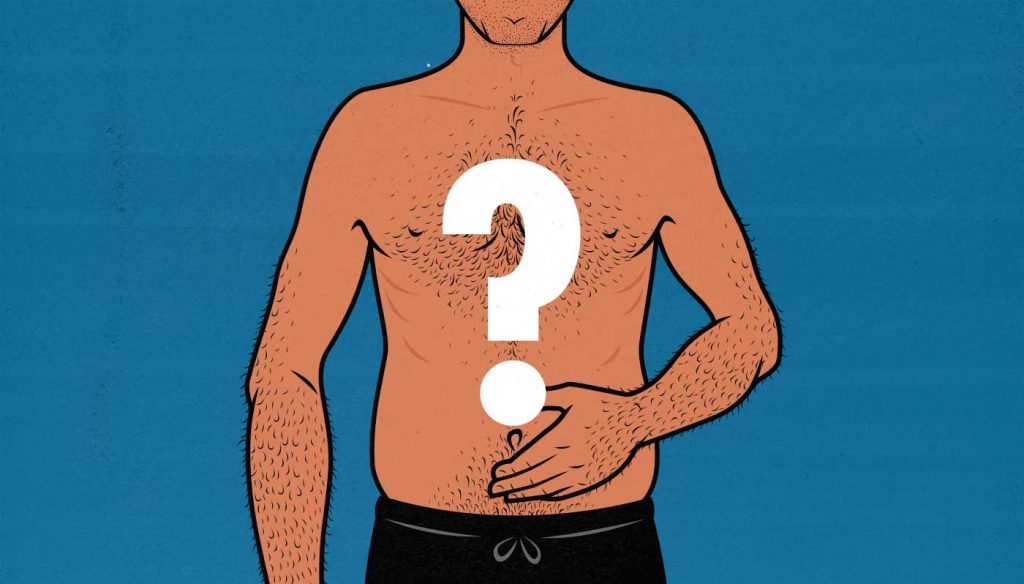 Let’s say you’re a skinny guy who’s eager to build muscle. But you aren’t lean. You don’t have much muscle definition. No abs. Maybe you’ve even “skinny-fat.” Are you lean enough to bulk? After all, even if you do a lean bulk, you’ll probably gain at least a little bit of fat. That can be stressful if you’re already feeling too soft.

Plus, many bodybuilders believe that if your body-fat percentage is too high, bad things will start happening if you bulk: you’ll start converting testosterone into estrogen, your insulin sensitivity will crash, it will be harder to build muscle, and you’ll start gaining proportionally more fat. The idea is that if you’re starting off too fat, bulking will only make you fatter. Is any of that true?

How do you know if you’re lean enough to bulk?

Before we dive into the article, let’s get onto the same page about what 20% body fat looks like. That body-fat percentage is often thought of as the point where health and hormones can start to decline, and so it’s often considered the bulking cut-off.

20% body fat looks different on different people. Some of us store more fat underneath our abs (visceral fat), giving us harder abs but worse health outcomes. Other people store more fat on top of their abs, making them look softer but without much risk to their health. And some guys store more fat in their legs, chests, or lower backs. Plus, the more muscle you have, the buffer you’ll look, and the better your muscle definition will show through. Still, for most newish lifters, 20% body fat often looks something like this:

If you’re trying to estimate your own body-fat percentage, here’s what to look for:

Don’t worry too much about the details or exact numbers. There are no sharp cut-offs. 20% isn’t that different from 15% or 25%. If your estimation is off by a few points, that’s okay.

For more, we have an article about how to guesstimate your body-fat percentage.

Does Being Lean Make it Easier to Build Muscle?

That isn’t quite right. The bros seem to have it backwards. The exact opposite seems to be true:

This data comes from a study by Schoenfeld et al., made into a graph by Greg Nuckols and Eric Trexler, Ph.D. It shows that people gain less fat when bulking at higher body-fat percentages. This may seem counterintuitive but think about all of the overweight people who start lifting weights and improving their diets. They’re often able to lose weight and gain muscle at the same time. That’s even better than making lean gains. That’s body recomposition.

Now imagine a guy at 10% body fat who’s trying to bulk up. There’s no way for him to build muscle without gaining weight. His body won’t replace what little fat it has with muscle, and even if it did, that wouldn’t be a good thing. 10% body fat is already on the low end of the healthy body-fat percentage range. If he lost a few more pounds of fat, it might crash his hormones and make him feel awful. Plus, losing a few pounds of fat would only free up enough room for a couple of pounds of muscle. So to build muscle, lean guys have to bulk.

So he bulks. And maybe he gains 7.5 pounds of muscle and 2.5 pounds of fat over the course of a few months. That brings his body-fat percentage up to 11%. He’s still lean, still has abs, and he’s quite a bit more muscular. That bulk is considered lean, but it isn’t nearly as lean as the overweight person who’s building muscle while losing fat.

In fact, if we look at extreme cases, such as bodybuilders or fitness models who cut down to under 10% body fat, they tend to gain pure fat when they start bulking. Even if they lift weights and eat a perfect diet, it’s almost impossible to build muscle until they regain 5–10 pounds of fat, bringing themselves back within the healthy range. And that’s a good thing. They benefit from that extra fat.

So with a higher body-fat percentage, it’s easier to gain muscle and easier to lose fat. But if you’re lean, you have to bulk to build muscle. And bulking often comes with at least a little bit of fat gain. And that’s okay. You can still finish your bulk looking plenty lean.

Can You Be Too Fat to Build Muscle?

Now let’s imagine that you’re already a little bit fat. Maybe you’re at 21% body fat. You’re slightly outside of the healthy range. For the sake of argument, let’s say that your body-fat percentage is beginning to affect your inflammation, cortisol, testosterone, and estrogen. Will you be more likely to gain fat if you start bulking? Again, looking at the data, that doesn’t seem to be the case.

The problem is, the more fat you have, the harder it is to see your progress. Maybe you start your bulk at 21% and finish it at 22%, gaining 10 pounds of mostly-lean mass as you do it. You’ll look a bit bigger. Maybe you’ll even look a bit better. But you still won’t have much muscle definition. You’ve can make great progress, it’s just that it can be hard to see.

Failing to see their progress is why a lot of skinny-fat guys get frustrated while bulking. They’re gaining strength, gaining muscle, and making decently lean gains… it’s just that their muscle definition isn’t improving. Their muscle gains are hidden underneath a layer of fat. It can create the illusion that they’re just getting bigger and fatter.

Plus, not every bulk goes perfectly. Maybe a skinny-fat guy really is just getting fatter. Maybe they truly aren’t building muscle. It can be hard to tell when all of the muscle gains are obscured by a higher body-fat percentage. Gaining strength is a great indicator of muscle growth, but even then, it can be hard to tell what proportion of muscle-to-fat you’re gaining. It can be confusing.

On the other hand, if you start by cutting, progress can be easier to see. Your muscle definition will start to improve as you lose fat, especially once you start getting under 15%. And if you’re gaining strength while losing weight, that’s a great sign that you’re gaining muscle while losing fat. Even if you just maintain your strength, you’re doing just fine. Problem is, if you already feel skinny, getting even smaller can be demotivating. That’s why we like to leave it up to personal preference.

You can build muscle perfectly well at higher body-fat percentages. In fact, having some extra fat tends to make it even easier to build muscle leanly. So easy, in fact, that you might not even need to bulk in the first place. You might be able to gain a bit of muscle and strength while either maintaining or losing weight, especially if you’re out of shape, new to lifting, or still fairly far away from your genetic potential.

The next thing to keep in mind is your health. Everyone is a little bit different, but once your body-fat percentage starts climbing past 20% body fat, your health might begin to slightly suffer. There might not be much difference between 18% and 25%, so I wouldn’t worry too much about the exact numbers, but if you’re already up in that range, gaining even more fat might not be the best, and so it might be better to start with body composition or a cut.

Finally, most people look and feel their best somewhere in the 12–17% body fat range. If you’re already fatter than that, you’ll probably prefer how you look and feel if you start by losing some fat. Your muscle definition will improve and your face will chisel out. On the other hand, you might want to spend some time building muscle first so that when you cut down, you have more muscle to show off.

As a default, we usually recommend that people who are over 20% body fat start with a cut. But it’s entirely up to you. If you’re skinny-fat and eager to bulk up, no problem—you’ll be able to build muscle just as leanly as anyone else, and perhaps more so. You may also be able to build muscle while cutting, though. There’s no wrong path.

The most important thing is to bulk and cut properly. You need to make sure that you’re losing fat while cutting, perhaps gaining a bit of muscle as you do it. You also need to make sure that you’re gaining mostly muscle while bulking, accompanied by large and lasting increases in strength. If you can do that, then whatever path you take, you’ll be marching closer to your goal.

If you aren’t sure if you’re lean enough to bulk, here’s some extra help: