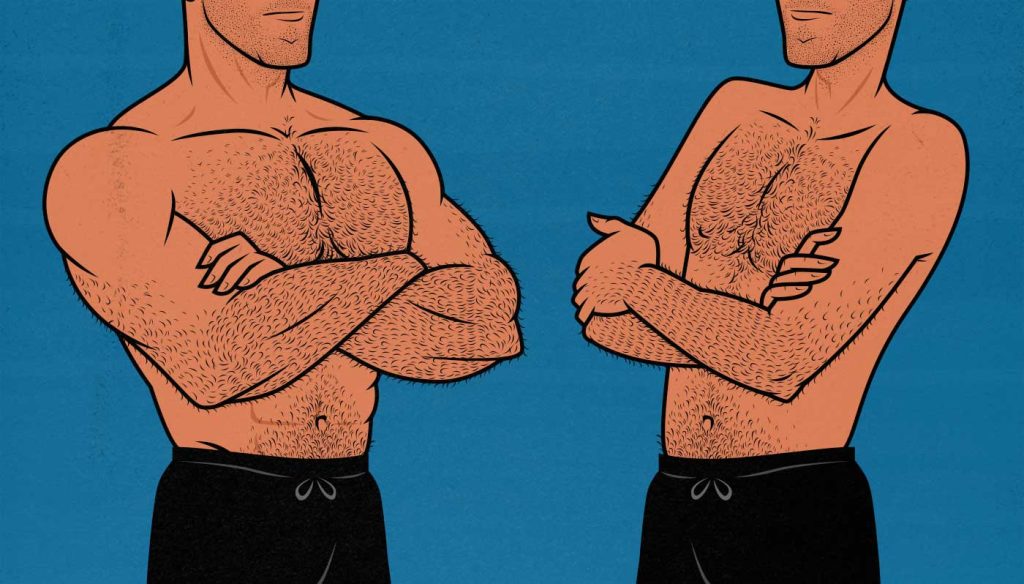 We surveyed 102 men attracted to men, asking them to rate varying degrees of muscularity and leanness. We also asked them which muscle proportions they found most attractive. Topics include:

Here are the results.

This is an attractiveness survey, but there’s a slant to it. We were more interested in aspects of our physiques that we can change through diet and exercise, less about things like height, bone structure, and insertions. The goal was to arm ourselves with information we can actually use. To do this, I drew up some bodies and then surveyed 102 gay and bisexual men, asking them to choose which of those bodies they found most attractive. The bodies weren’t labelled or ordered. For example, we asked, “Which degree of muscularity do you find most attractive?” and then showed them this spread:

The survey has some limitations. We specialize in helping skinny guys build muscle. Most of the guys who filled out our survey are naturally thin; they exercise, lead a healthy lifestyle, and eat a good diet. Or at least they try to. That’s not necessarily representative of the overall gay community.

It’s also worth pointing out that we asked guys to select the most attractive body in the spread. Most people are attracted to more than one thing. The guys filling out this survey might have found all of the bodies attractive, just in varying degrees.

Finally, a limitation with all of these physique surveys is showing people posed photos and asking them what they prefer. This might line up well with people rating photos on a dating app, but it might apply less to how someone looks when wearing clothes, under different lighting, or when they aren’t posing.

What Degree of Muscularity Do Gay Men Prefer?

This is the question that made me want to do this survey. We’ve had clients tell us gay men prefer more muscular bodies than women do. They fear they won’t be able to get muscular enough to be attractive.

If we compare this against what women find most attractive, it seems that gay men do indeed prefer more muscular bodies than women. It seems that men—both gay and straight—prefer greater degrees of muscularity in themselves, too. 49% of men said they wanted to have a “strong” body.

The bad news is that these stronger physiques roughly line up with the natural muscular potential of many guys. Building a “strong” physique is realistic, but it might take 2–5 years of hypertrophy training and proper nutrition to get there. The good news is that “athletic” physiques scored nearly as well, and it’s much easier to reach that degree of muscularity. Within a few months, most guys can have an athletic amount of muscle.

Again, this shows that gay men prefer a greater degree of fitness than women. (Women rated the “healthy” physique as the most attractive.) And again, the most attractive body lines up almost perfectly with the bodies that men prefer having. If you get to a degree of leanness that you like, other guys will probably like it, too.

The trouble is, it’s usually healthier to have a body-fat percentage somewhere in the teens (study). Some guys can get away with having 8–12% body fat without any negative side effects. But most men who try to maintain under 10% body fat wind up with suppressed hormones, perpetual hunger, fatigue, and difficulty gaining muscle and strength.

Remember that we asked guys which bodies they found the most attractive, not which ones they were attracted to. I’d guess both the “healthy” and “lean” physiques are attractive; it’s just that when asked to pick between the two, there’s a preference for the leaner physique. Plus, 34% of men preferred the “healthy” body-fat percentage.

The Most Attractive Male Body Proportions

This one surprised me. It’s common for men to focus on building bigger chests, shoulders, and arms, often neglecting their backs and lower bodies. But is that what other men actually find most attractive?

Once again, these results diverge from what women prefer. No big surprise there. Interestingly, though, we see some divergence from the bodies men want to build for themselves. Most men want to build either a “balanced” body or to emphasize their upper bodies. But gay men slightly preferred the guy with a more muscular lower body. With that said, all of these proportions had their niche, with a fairly evenly split between all three bodies.

If we look at the side view, the preference for a bigger lower body becomes clearer. 48% of gay men preferred the physique with a smaller upper body and a bigger butt. Squat and deadlift variations, then, seem like an important part of building an attractive physique. But how much do you need to squat and deadlift to build an attractive lower body? More on that in a second.

When we asked men which muscle groups they found most attractive, they said:

One interpretation is that having a muscular chest and toned arms is the most important, but they don’t need to be that big. Having a bigger lower body might be less important, but there’s a greater benefit to making it especially strong. I suspect this means doing plenty of bench presses and biceps curls and making sure to get damn strong at the squat and deadlift.

What Lifts Should Gay Men Focus On?

When we asked men what lifts their partners should focus on, they said:

This makes total sense. Doing these four lifts with this order of importance will build a strong, athletic physique. In most cases, it will build a body with the proportions that men find most attractive. It deviates a little bit from what men prefer for themselves, though. Men told us they preferred focusing on the chin-up, push-up, bench press, and deadlift. So if you want your partner’s advice: do more squats.

How Strong Do You Need to Get?

When we asked guys how strong their partner’s bench, squat and deadlift should be, most guys didn’t care. They said lifting weights with good technique was more important than how much weight was on the bar. And they said having good control of your own body weight (e.g. being good at chin-ups and push-ups) was more important than how much weight you lift in the gym. But the guys who cared about strength tended to say that a 225-pound bench press, 315-pound squat, and 315-pound deadlift was ideal. And almost everyone said they wanted their partner to be stronger than the average man.

In attractiveness research, it’s common to use shoulder-to-waist or chest-to-waist ratios as a proxy for the muscle to fat ratio that someone has. The bigger their shoulders and chests are, and the smaller their waists are, then the leaner and more muscular they’re likely to be.

When trying to build an attractive physique, though, it’s not just about becoming bigger and leaner. We also have some control over which muscles we emphasize. That’s why I wanted to see whether it made more sense to emphasize the shoulders or chest, especially since it’s so common for guys to struggle with one of those two areas.

85% of gay guys preferred the body with a bigger, more muscular chest. This lines up exactly with the proportions that men prefer to build for themselves. So again, it’s a situation where you can look at your own proportions and bring them up to your own standards. Your intuition probably lines up with what other men will find attractive.

Should You Train Your Neck?

This is another question I was really interested in. It’s common for guys to train all of their muscles except for the muscles in their necks. This commonly causes the neck to lag, especially in naturally skinny guys who start with thinner necks.

63% of men found the guy with the “athletic” neck most attractive. The average man might have an athletic neck by default, especially if they wrestle or play sports. Skinny guys with thinner necks can benefit from bulking up their necks, though.

When we surveyed our male audience, 9% said they were considering taking steroids to help them build muscle. I can see why. Many famous fitness models, bodybuilders, actors, and influencers use performance-enhancing drugs to build leaner, more muscular physiques.

When we asked gay guys what they thought, 94% said they’d prefer if their partner didn’t take steroids. Of that 94%, half said it was a total dealbreaker. The other half said it was unattractive, but they’d still give the guy a chance. Only 6% said they preferred guys who took steroids.

The good news is that the physiques being rated as the most attractive don’t require performance-enhancing drugs to achieve. The most attractive degree of muscularity is well within the genetic limit of most men. Remember, all you need to do is bench 225, squat 315, and deadlift 315. These are not unrealistic numbers to hit.

The harder part is that there’s a preference for guys with abs. Maintaining abs year-round can be difficult, especially for guys with naturally higher body-fat percentages. That might not be an issue for us naturally skinny guys, though, given that we often have good genetics for being lean.

This steroid question shows a greater preference for natural guys than for guys with abs. Guys with a healthy body-fat percentage (14–17%) got a third of the votes. Guys taking steroids only got 6% of the votes.

Finally, many of our skinny clients are worried that if they bulk up, they’ll gain too much fat, finishing looking worse than when they started. So I wanted to test this idea. When asked to pick between a skinny guy or a skinny-fat guy who messed up his bulk, which physique do men find more attractive?

The other issue is that we get many skinny-fat guys who are self-conscious about their physiques, assuming they’re in the worst possible position. Are they?

70% of men rated the skinny-fat physique as being more attractive than the skinny physique. Obviously, the goal is still to bulk leanly. But even if you gain a bit of fat along the way, you’ll still wind up looking more attractive than when you started. And for skinny-fat guys who are reading this, don’t worry. It’s not a bad place to start or to be.

Men are most attracted to men with muscular, lean bodies. There’s a limit to the degree of muscularity that’s preferred, though, and most men said that a 225-pound bench press, 315-pound squat, and 315-pound deadlift was enough. Plus, thinner, more athletic bodies with a slightly higher body-fat percentage (13–17%) were considered quite attractive, too.

These goals are realistic for most natural lifters, but they’re at the upper end of what’s achievable. It may only take a few months to build an athletic physique, but reaching the degree of muscularity and leanness that’s considered ideal might take substantially longer—perhaps several years.