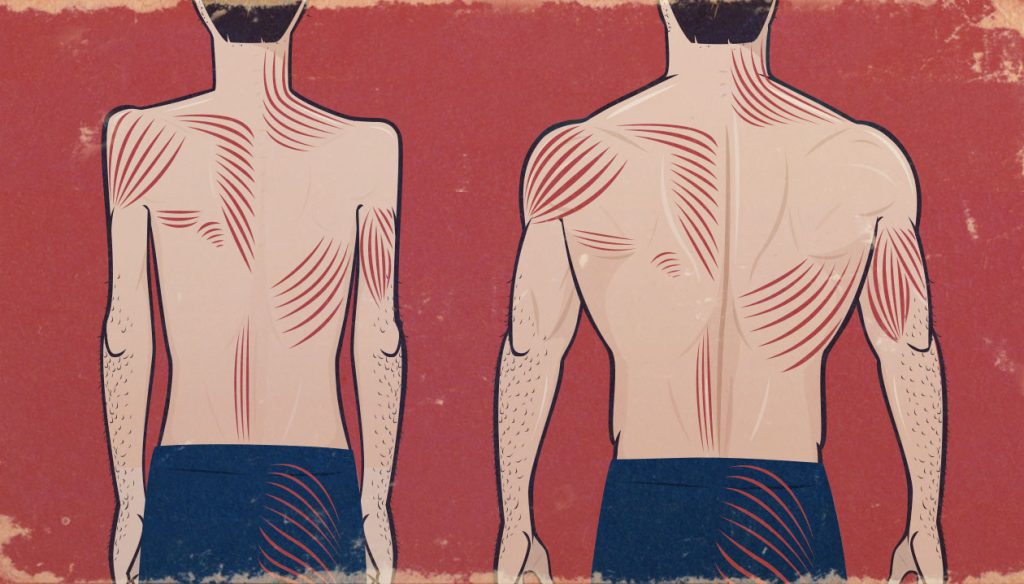 One of the most common questions we get asked is, “What exercise is best to grow my small chest (or arms, shoulders, abs, etc)?” It’s a surprisingly large question. Yes, some exercises tend to be better for activating certain muscle groups, but that’s just the tip of the iceberg:

So we’ve put together a guide showing you the best exercises for each muscle group. These exercises represent your best chance of safely building muscle as rapidly as possible for your experience level.

Before we get to the infographic, we’ll break down how we went about selecting these exercises by explaining a few of the things we considered.

Are You A Beginner?

Let’s say that you’re a beginner who’s trying to build the broadest shoulders possible. Just like an advanced lifter, you’d want to lift heavy weights through a large range of motion for a moderate number of reps, as detailed in our hypertrophy training article.

So, given this information, it would make sense to choose the dumbbell overhead press as our main shoulder lift, right?

To reap the rewards of that advanced lift you need solid enough shoulder strength, stability and mobility. If you’re a skinny guy with lanky limbs and iffy posture, it might make more sense to choose a lift that’s a little bit easier to learn. Maybe when you first start lifting, you focus on learning push-ups to develop the fronts of your shoulders (front delts), and you use lateral raises to bulk up the sides of your shoulders (side delts). Otherwise, you may be putting your shoulders and lower back at risk without even properly stimulating the muscles you’re trying to grow.

So, whether you’re a beginner, an intermediate, or an advanced lifter, there’s a good case for building a workout program around the “Big Five” compound lifts, but it might be better to start with easier variations and work your way towards the harder ones.

What Lifting Equipment Do You Have?

As a beginner, you don’t need much equipment to build muscle. If you have access to fancy equipment, great, but as a skinny dude you can build plenty of muscle with just a couple adjustable dumbbells. In fact, as we mentioned with the dumbbell shoulder press, dumbbell exercises are often the best exercises for building muscle.

However, as you gain more and more strength, it can start to become harder to load dumbbell lifts heavy enough to stimulate muscle growth. A goblet squat is amazing for building muscle, but at a certain point, you’ll be able to goblet squat the heaviest dumbbell without even challenging your legs or upper back. It will stop being effective.

At that point, it can be a good idea to either get a gym membership or to build yourself a simple barbell home gym. Or perhaps you switch to doing one-legged squat and deadlift variations with your dumbbells. There are lots of options.

Both compound lifts and isolation lifts are important. Compound lifts allow you to use the heaviest weights and to stimulate the most muscle groups at once. They’re also going to load your spine and connective tissues with more weight, making your body more robust. They’re fantastic.

However, isolation lifts have their place in a good bulking routine. Beginners benefit from isolation lifts because they’re simpler to learn and they make building muscle easy.

More advanced lifters benefit from isolation lifts because they give our muscles a more varied stimulus, helping us to build fuller muscles and a more attractive body. Furthermore, using a wider variety of lifts helps to prevent wear and tear on our joints.

So in addition to the big compound lifts, we’ve also included isolation exercises (in bold italics) for muscles that you’re especially eager to grow (such as your biceps) and muscle groups that don’t activate as easily (perhaps your chest).

For example, if you’re torso dominant like me, the bench press will be the best exercise to build up your chest because it will allow you to press a ton of weight. I grew my chest pretty much exclusively with the barbell bench press.

If you’re limb dominant though, like Jared, the barbell bench press may only stimulate your shoulders and triceps, making it a poor lift to bulk up your lagging pecs. He succeeded in growing his chest by switching to the dumbbell bench press and then adding in chest flyes.

Assuming you want to grow every muscle quickly, I’d recommend doing a mix of both compound and isolation lifts for your entire body. This has been shown to build more evenly developed muscle mass, more muscle mass overall, and more strength (study, study).

You’d begin your workout with the heavy compound lifts and then finish with the lighter isolation lifts. For example, you may find that doing chin-ups will grow your biceps just fine, but if you want to build truly burly biceps I’d recommend doing bicep curls, too:

Muscle Group illustrations. Each muscle has a few lines showing their direction of pull. These are simplified but they’ll still show you which directions these muscles can pull.

For example, as you can see, the muscles in your chest run horizontally. You can target the lower fibres with a decline bench press, the upper fibres with an incline bench press. (A regular bench press will target both.) However, you probably won’t have as much luck targeting your “inner” or “outer” chest because the same muscle fibres span all the way across.

We kept this in mind when putting this diagram together. Your best bet for stimulating every part of every muscle group is to use a wide variety of exercises that work your muscles in slightly different ways. Comparable (somewhat interchangeable) exercises are on the same line, and complementary exercises are shown on different lines.

So if you’re a beginner who wants to build up a big chest, you might want to do dumbbell bench presses and push-ups and dumbbell pullovers, and then either the dumbbell chest fly or the pec deck.

Why Are Some Lifts Better Than Others?

To give you an idea of how all these factors come together, let’s use the example of the goblet squat. A goblet squat activates most muscles in your body, it optimally stimulates several of them, it’s relatively easy to learn, and it requires just one dumbbell.

Conversely, a Smith machine back squat does a poorer job of activating many muscles, it’s more likely to result in injury, it requires a fancy piece of equipment, and the strength that you gain won’t transfer well to other lifts. After all, you wouldn’t have built up your stabilizer muscles or practiced the movement pattern that would allow you to smoothly progress to squatting with free weights. Now, Smith machine squats aren’t necessarily a bad exercise, but they aren’t the whey protein of the crop, either.

This is not an exhaustive list. Just good solid examples that will get the job done incredibly well.

We hope that helps!

Update: Wow—this image has gotten over 70,000 shares on Pinterest! Thanks, guys.