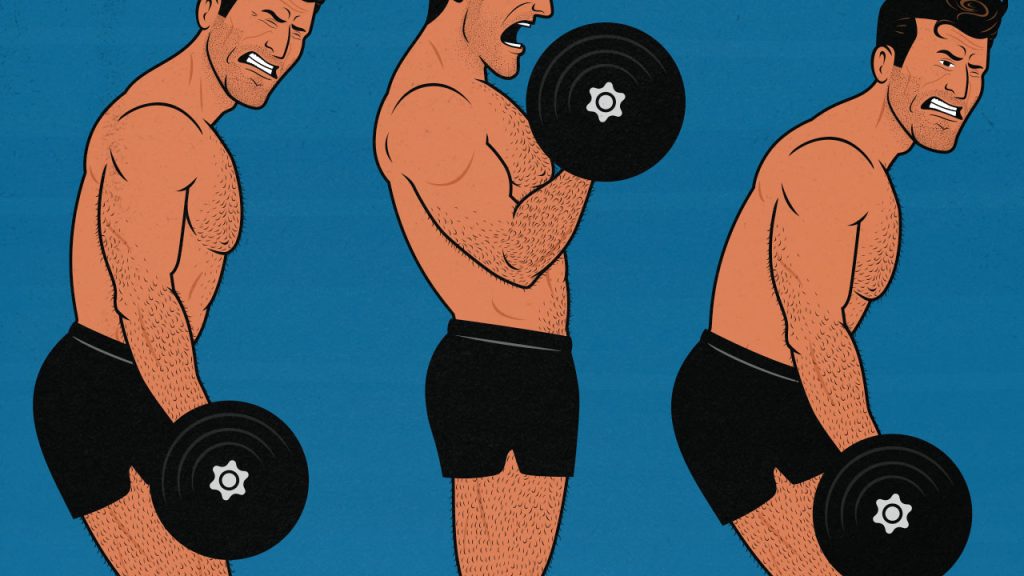 Lifting with momentum has a bad reputation, especially among bodybuilders. The concern is that if you lift explosively, or if you cheat, or heave, or swing, then you’ll make some parts of the lift too easy on the muscles you’re trying to train. I disagree with that idea, but there is a small grain of truth there. Sometimes.

What’s rarely mentioned, though, is how if you use momentum wisely, it can help you gain more strength, athleticism, and even muscle mass.

If you’d rather watch a video, we’ve got a YouTube video covering all of the same content as the article:

Let’s say you’re trying to bulk up your shoulders with an overhead press, but you generate momentum with your lower body to throw the weight up, reducing the demands on your shoulders, and thus reducing muscle growth.

That explosive version of the overhead press is called a push press. And if you’re not doing it properly, it’s true—the momentum can shift emphasis away from building bigger shoulders. After all, you’re lifting the weight with your legs instead of your delts. And who wants bigger legs?

Mind you, there’s nothing stopping you from pushing with your shoulders during a push press. And as you get better at the lift, continually trying to progressively overload it, you’ll get to a point where you have to fully engage your shoulders. In fact, that’s the correct way to perform the lift. You’re supposed to use your legs and your shoulders.

The same is true with lifts like cheat curls and power curls. You’re using hip drive to generate momentum, sure, but there’s nothing stopping you from also fully engaging your biceps. If you do them properly, they can be great curl variations for building bigger biceps.

Generating momentum with your lower body isn’t necessarily a bad thing, even for bodybuilders who only care about muscle hypertrophy. In fact, momentum might us build more muscle.

A couple of years ago, I was talking with Greg Nuckols (from Stronger by Science) about the best lifts for building muscle. He argued that the push press is even better than the overhead press because it has a larger effective range of motion.

For push press, my thinking is you want to stress as much of the ROM as possible.  With strict, you’re really stressing about three inches, because the sticking point is SO extreme.  With push press, you use momentum to clear that point, so you’re a) still training the lower end hard, assuming you’re actually pressing on the bar the whole time instead of just relying on your legs, b) really training the upper half hard, and c) ensuring the midrange doesn’t miss out if you’re controlling the eccentric.

But let’s forget the push press for a moment. Let’s say you’re doing a totally strict overhead press. Even then, you can still generate momentum, and you can still use that momentum to get better results.

The beginning of the range of motion is a little bit easier, so if you’re lifting explosively, trying to accelerate the weight up, then you’ll still be able to generate some momentum to help you through the sticking point. It’s the exact same idea as the push press, just not as exaggerated.

The same is true with biceps curls, bench presses, squats, conventional deadlifts, and rows. The very beginning of the lift is usually at least a little bit easier than the middle, giving us a chance to generate momentum that can help us fight through the sticking point. We work harder at the beginning, perform better in the middle, and then lock out and lower more weight.

The hardest point of most free-weight exercises is somewhere in the middle, where the lever is parallel to the ground, creating a longer moment arm. This is where we’re challenged the most. It’s our sticking point.

If you look at this diagram, you’ll see that when your forearm (the lever) is parallel to the ground, it creates a longer moment arm, making the weight feel around 40% heavier. (If you want a deeper explanation of how this stuff works, we have a full article on resistance curves.)

Now, your biceps are built for this. Your tendon connects to your forearm such that it gives you better leverage where you’re more likely to need it. The internal moment arm is longer, too. That’s one of the reasons free-weight exercises are so cool. We’re built so well for them. But even so, when your forearm is parallel to the ground, the lift is still a bit harder. If you’re lifting slowly, minimizing momentum, you’ll probably fail there. That’s not the end of the world, but we can do better.

If you can generate momentum, it can help you fight through that sticking point, allowing you to lift more weight in a given rep range. You’re also challenging your muscles through a larger range of motion. Instead of just struggling in the middle, you’re working harder at the beginning to generate momentum, you’re struggling through the sticking point, and then you have more weight in your hands as you fully contract your biceps. Plus, you’re also lowering more weight, which can be good for building muscle, too.

By lifting more explosively and generating more momentum, you can improve your performance. You can also improve the strength curves of most lifts, making them even better for building muscle.

The other nice thing is that you’re lifting in a natural, athletic way. you aren’t putting artificial limitations on yourself. You’ll gain more strength, power, and athleticism, too. That’s why so many powerlifters and athletes lift explosively, do speed work, or include power training in their workout routines.

You Still Need to Lift Properly

A push press isn’t the same thing as a poorly performed overhead press. It’s a different variation with its own standardized way of being performed correctly. The same is true with power curls and cheat curls. They aren’t clumsy barbell curls, they’re separate lifts with their own separate rules.

The idea isn’t to take the lift you’re doing and use momentum haphazardly, whenever you feel like it. That can make it hard to tell if you’re getting stronger. Rather, the idea is to choose the variations that suit your goals, gradually improve your technique, and progressively overload them.

Thing is, almost every exercise can be done explosively, even while using totally strict, textbook technique. When you’re doing a regular barbell curl, you can put in your full effort right from the beginning of the rep, trying to generate momentum to help you fight through the sticking point. That isn’t cheating. There’s no breakdown of form. It’s just a more athletic way to lift.

There are ways we can misuse momentum. If you’re sporadically heaving, swinging, or throwing weights, you might not be training the muscles you think you are. And even if you are working the correct muscles, you won’t know when you’re getting stronger, and you may struggle with progressively overloading your muscles. These are real problems.

But there are explosive versions of some lifts, and those explosive versions are often great for building muscle, especially if you lower the weight back down slowly and under control. There’s nothing wrong with doing push presses instead of overhead presses, or doing power curls instead of biceps curls. These can be great variations for intermediate lifters. And they have some cool advantages for gaining muscle, strength, and power.

And even when you’re doing bodybuilding lifts with strict technique, generating momentum at the beginning of the range of motion is usually a good thing, especially if you’re generating that momentum with the muscles you’re trying to grow. By lifting more explosively, you’ll be able to handle more weight and work your muscles through a larger effective range of motion.

If you use it wisely, momentum can help you gain more muscle, strength, and power.