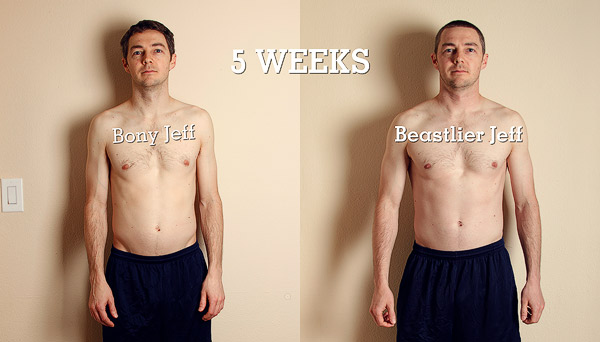 Haha watch out bodybuilders—us skinny creative dudes can diesel-up too! The handsome yet thin man on the left is Jeff before starting the Bony to Beastly Bulking Program. He started the program at 136 pounds with internally rotated shoulders, a head that jut forward, and hips that made his belly stick out—issues that he was eager to fix.

The Beastlier man on the right is Jeff 5 weeks later weighing in at 145.5 pounds and with most of his postural problems greatly improved. He also succeeded in balancing out most of his muscle asymmetries while increasing muscle size everywhere.

Jeff’s a 34 year old graphic designer and photographer with a wife and two kids. He grew up skateboarding, surfing, snowboarding and, like most of us naturally skinny guys, he’s got a few failed weight gain attempts under his belt, too. And now a successful one.

What impresses me about his skinny-to-muscular transformation-in-progress is not so much the change, but rather the timeframe. This is just five weeks of progress. He’s only 1/4 through the workout routine.

His shoulders are much broader, his chest is bigger, he’s quite visibly developing beastly core strength, and, although you can’t see it in this photo, his legs and glutes have exploded in size. And what wife doesn’t like a good pair of glutes? You’re welcome, Jeff’s wife 😉

His secret? I’ll let Jeff answer that one.

After Jeff gained 3.75 lean pounds in one week another Bony to Beastly member, Obe, asked him his secret. Enter Jeff:

Hi Obe. After my first week’s failure at gaining anything I knew that I needed to take eating serious, real serious. Probably the thing that helped me the most was having multiple options with food and lots of it in the fridge, and also using a calorie counter to track my intake. When I go to the store I will buy 3 tubs of greek yogurt instead of one to keep the fridge full. Things like that. I have staple foods that I eat pretty much everyday at some point and supplement that with high protein foods at meal times. Usually those staples are Greek yogurt, eggs, whole milk and lots of it, peanuts, almonds, peanut butter, cheese, eggs and chicken. I also keep a drawer stocked with a few protein bars in case I am going to be out all day and I need some extra calories or protein. Making a shake on the days that food was going to be a problem has also been a huge boost as well. I try to start the day off with a huge breakfast but it doesn’t always work out that way.

My motto lately is if you’re thinking about food you should be eating lol. This last week I was putting in over 4000 calories in about half the week and probably around 3600 to 3800 the other half. I pretty much stick to the diet plan of good stuff but I am guilty of throwing in a 16 oz. white chocolate mocha with whole milk in here and there but that’s probably the worst that I do. I know that things can get expensive bulking up but I also found that I can get some things at Costco that make buying in bulk a little cheaper. Whole milk, peanut butter, eggs, dave’s killer bread, blueberries, things like that. I have taken cues from the guys here about what works for sure. Hope this helps.

Btw Obe, I was just like you before the program. The most I had ever weighed was probably 137 or 138 and had never been able to gain when I tried. This has been such an incredible experience so far. I take my end of phase 1 photos next week and can’t wait to compare the progress. I started the program at 136 and now I am just shy of 144 at week 4. So stoked as I had never broken the 140 barrier before and now its in the rear view.

Pair a good bulking diet with a good bulking workout routine and you’ve got the perfect environment for ectomorph muscle growth. The workouts are made up of compound lifts that are based on the “Big 5” bulking lifts:

We also use a few core and posture exercises, such as planks. After all, many of us ectomorphs have poor hip, shoulder, and head posture.

And although we base our routines on compound lifts, we never shy away from isolation lifts like chest flyes and biceps curls. After all, many of us naturally skinny guys have lankier arms and narrower shoulders.

Judging from the before photo Jeff probably has naturally lower levels of growth hormones, like testosterone, so the diet and workouts are all designed to naturally raise those levels. This partly explains why he’s able to pack on muscle so quickly.

Another reason Jeff is managing to gain weight is because he’s solid in the kitchen. He realized after his first week that in order to get results he needed to change his eating habits. One of the ways he overcame his small appetite was by making smoothies.

How Was Jeff Able to Build Muscle So Quickly?

There’s no magic secret, no oddball exercises, no weird supplements. He just started, doing the best he could as he went along. And then every time he ran into a setback, instead of giving up, we helped him work through it.

Was his form perfect on every exercise? No, he’s a beginner. We can’t expect a beginner to be able to lift with perfect form. That’s why we started him off with easier variations of the big bulking lifts.

A couple months from now Jeff will be finishing the program with a strong and healthy beast of a physique. His before photos will be a distant and pleasant memory—a symbol of how far he’s come.

Shane Duquette, BDes, is a writer and illustrator with a degree in design from York University. He co-founded Bony to Beastly and Bony to Bombshell, where he specializes in helping skinny people bulk up.